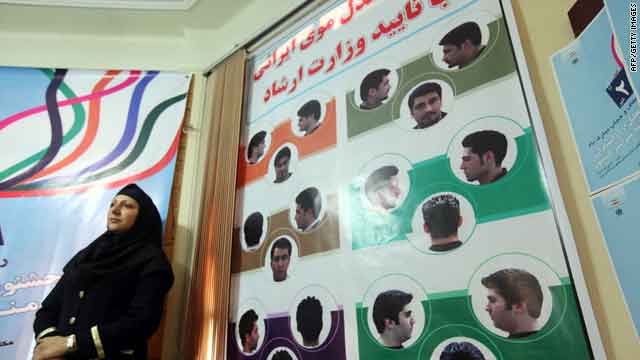 A woman in Tehran on Monday stands next to a board with pictures of men's hairstyles authorized by Iran.
STORY HIGHLIGHTS
RELATED TOPICS

(CNN) -- Iran has laid down the law: mullets won't make the cut.

The Islamic regime, which strictly enforces head coverings for women, issued grooming guidelines for the guys this week.

Among the do's that are now don'ts? The '80's Prince-style pompadour preferred by many young Iranian men, the Steven Seagal-style ponytail and the "business in the front, party in the back" sentiment of the mullet -- also popular among the Persian populace.

The approved styles have a distinctly 1950s look to them: short on the front and sides for the most part. But the gel-slathered, combed-back 1980s look also received the government's blessing.

The "Islamic" haircuts were unveiled at the Hijab and Chastity Festival, a fashion event designed to show how the country's youth can be stylish yet not run afoul of the fashion police.

"Hair styles have been designed based on the shape of the neck, beard, the size of the chin and provincial cultures," said Jaleh Khodayar, the secretary of the festival. Her comments were reported by the semiofficial Mehr news agency.

"In designing these hair styles, we have not tried to go backward. On the contrary, we have tried to make our designs a mixture of our traditions and Iranian culture, as well as the latest fashions and by doing so confront the cultural assault by the West (on our country)."

Majid, a 32-year-old Tehran resident who did not want to give out his last name, shrugged his head in amusement.

"I don't think these young men will stop wearing these hairstyles, even though in my opinion they are actually pretty strange," he said.

He prefers his own hair on the short side.

To the outside world, the crackdown on cuts may represent further restrictions by an already restrictive regime.

But in one way, they are a loosening of guidelines: None of the photographs of acceptable grooming styles feature models with full-grown beards -- a look, a la President Mahmoud Ahmadinejad, that Iran had encouraged for years.