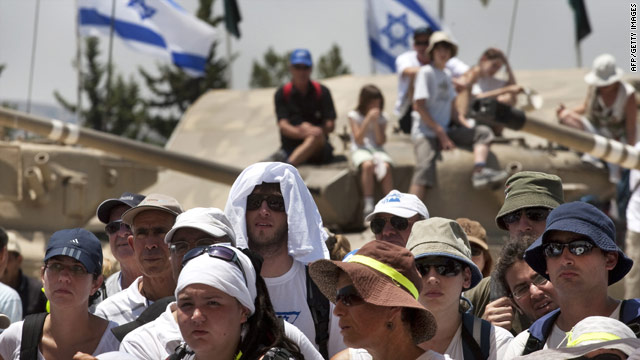 Jerusalem (CNN) -- A 12-day march in support of a prisoner exchange to win the release of Israeli soldier Gilad Shalit ends in Jerusalem Thursday on the doorstep of Prime Minister Benjamin Netanyahu.

The Shalit family, along with the thousands of supporters who joined them on the march, said it intends to camp outside Netanyahu's official residence until Shalit is freed.

Shalit was captured in Gaza by Hamas about four years ago.

Netanyahu has said he will meet with the family, earlier calling Shalit's father Noam to extend an invitation.

"I invited him to meet with me, along with the rest of his family, immediately after the march reaches Jerusalem," Netanyahu said at the start of the march.

"I told him, 'I know Noam that you are on a long journey, which will end in Jerusalem. I want to see you. I would be glad to meet with you.' This will not be the first meeting. Of course, I have spoken with him many times."

Several prisoners swap deals between Israel and Hamas have already failed. The family and their supporters hope the added pressure will help jump start another round of talks between the two sides.

Shalit has been held captive since June 25, 2006, when Palestinian militants from Gaza, including Hamas, captured him. The militants tunneled into Israel and attacked an Israeli army outpost near the Gaza-Israel-Egypt border, killing two soldiers in the assault. Israel immediately launched a military incursion into Gaza to rescue Shalit, then age 19, but failed to free him.

Since being imprisoned by Hamas, Shalit has not been allowed any contact with the outside world, nor any visits by the Red Cross. Details of his incarceration and physical condition remain unknown.

In October 2009, Hamas released a tape of Shalit as a proof of life, in which he urges the Israeli government to do more for his safe release.

"The government and the security services are continuing to make constant and varied -- open and secret -- efforts to bring Gilad Shalit back home safe and sound," Netanyahu said last month.