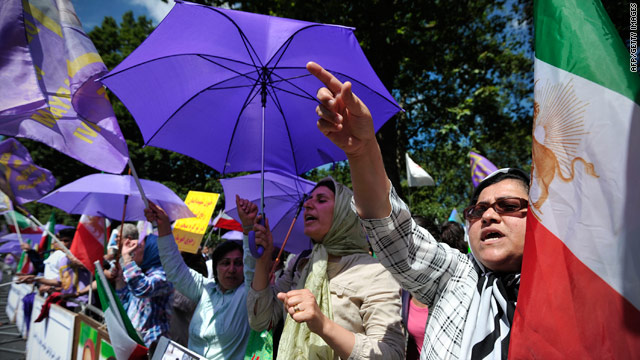 Protesters in London demonstrate against the planned stoning and to mark the 11th anniversary of the 9th July student uprising.
STORY HIGHLIGHTS
RELATED TOPICS

The well-publicized case involves Sakineh Mohammedie Ashtiani, who faces the possibility of execution by stoning after being convicted in 2006 of adultery.

Her lawyer, Mohommad Mostafaei, told CNN that Ashtiani confessed to the crime after being subjected to 99 lashes. She later recanted that confession and has denied wrongdoing, he said.

Ashtiani's case has drawn international attention and many human rights activists have called for the sentence to be changed.

Protesters in London, England, on Saturday condemned the sentence and called for the end of hanging and stoning executions during a rally outside the Iranian Embassy.

But Ajdar Sharifi said Sunday that "whenever the minister (Sadeq Larijani) orders the verdict again ... it will take place despite the Western media propaganda," according to IRNA.

"We do not pay attention to the Western media," IRNA quoted Ajdar Sharifi as saying.

Last week, in what was the Islamic republic's first public statement on the case, Iran seems to back away from an execution-by-stoning sentence, although it left open the possibility that Ashtiani could be executed by another method.

The Iranian Embassy in London, England, said Thursday that "this mission denies the false news aired in this respect and ... according to information from the relevant judicial authorities in Iran, she will not be executed by stoning punishment.

But in response to that statement, Drewery Dyke of Amnesty International in London said Ashtiani still faced the possibility of execution. "We have noted in the past that those who have been sentenced to stonings have gone on to be hanged," he said. "That remains a concern."

Ashtiani's lawyer has said his client's conviction was based not on evidence but on the determination of three out of five judges. She has asked forgiveness from the court but the judges refused to grant clemency. Iran's supreme court upheld the conviction in 2007.

Ajdar Sharifi told IRNA Sunday that Ashtiani's crimes were "numerous" but added "because of morality and ethics, I cannot go into the details of the crimes, but if the public knew, they would understand the criminal nature of them."

CNN's Mitra Mobasherat and Gena Somra contributed to this report.