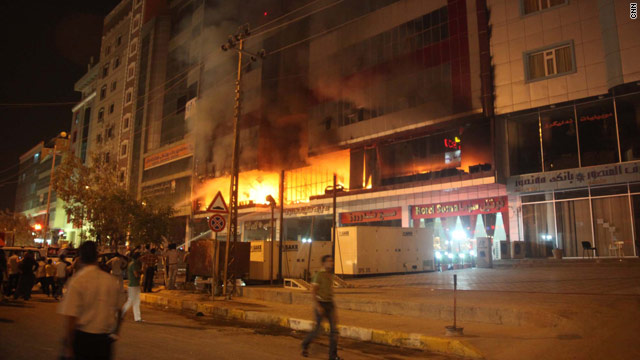 A short circuit is being blamed for starting a fire at the Soma hotel in the city of Sulaimaniya, Iraq, on Thursday.
STORY HIGHLIGHTS
RELATED TOPICS

A short circuit has been blamed for starting the fire, which broke out at the Soma hotel in the city of Sulaimaniya about 11 p.m. Thursday. Women, children and foreigners were among those killed.

"Our hearts go out to the families of the victims of this tragic accident, and we wish a speedy recovery to the injured," said Kurdish Prime Minister Barham Salih, who visited the scene of the accident and the hospital where the injured were being treated.

"I have ordered an immediate investigation into the accident to establish the causes of the fire and assess the emergency procedures that followed. We will spare no effort in making sure such tragedies do not occur in the future."

Sulaimaniya, in Iraq's autonomous Kurdistan region, is the capital of a province of the same name, one of the region's three provinces. It's about 280 kilometers (173 miles) north of Baghdad.

During the summer, hotels in the city are usually packed with tourists from southern provinces because Sulaimaniya is considered a safer city and the weather is nicer. Tourists were among those killed, officials said.

Jabbar Yawer, spokesman of the local security forces, told CNN that three Asians who work for a local cell phone company were among those killed. The company's headquarters is close to the hotel, and many visiting employees stay there.

The Kurdish Regional Government said 14 Iraqi nationals and 14 foreign nationals were killed. The foreigners were from Canada, Australia, South Africa, the United Kingdom, Ecuador, Venezuela, Sri Lanka, Lebanon, Bangladesh and Cambodia. One victim remained to be identified, the government said.

Earlier, other Kurdish officials said an American and a Filipino were among the dead.

Heath officials in Sulaimaniya said that most of those who died were suffocated by smoke because there were no side stairs for an emergency escape in the hotel and the windows are thick and hard to smash.

But officials said three young men were able to jump from the hotel's fifth floor in an attempt to save their lives. Two of them died and the third was critically injured, officials said.

Kurdish Regional Government President Massoud Barzani asked authorities to investigate the causes of the fire and take steps to prevent another such tragedy. The Kurdish governmen said Iraqi Prime Minister Nuri Al-Maliki issued his condolences and offered to help deal with the tragedy.

Salih also ordered an immediate review of fire safety measures at all public buildings in the city and the Kurdish region. The Kurdish Regional Government is working closely with the embassies and consulates to inform the next of kin and to work out repatriation issues.