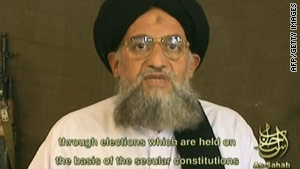 (CNN) -- A man identified as Ayman al-Zawahiri, al Qaeda's No. 2 man, promises his followers victory in Afghanistan and Iraq, vowing that these wars will eventually lead to a battle to liberate Jerusalem, in an audio message posted Monday on jihadist websites.

The audio was released by As-Sahab Media, al Qaeda's production company. CNN could not verify the authenticity of the message.

Radical Islamists often use the Arab-Israeli struggle as a propaganda tool to recruit militants because they believe that Israel has no right to exist on what they consider to be Muslim and Arab land.

In the message, the speaker also says mujahedeens -- Islamic militants backed by the Taliban and al Qaeda -- are moving from one victory to another in Afghanistan against U.S.-led forces.

The offensive in Afghanistan's Marjah district, known as Operation Moshtarak, was launched in February by an international coalition of 15,000 troops including Afghans, Americans, Britons, Canadians, Danes and Estonians.

Video: 'We're not winning' in Afghanistan

The Taliban had set up a shadow government in Helmand province's Marjah region, long a bastion of pro-Taliban sentiment. It is a key area in Afghanistan's heroin trade, producing much of the opium used to fund the insurgency.

Less than three weeks ago, Gen. David Petraeus -- the top U.S. commander in Afghanistan -- said Operation Moshtarak is not going as well "as the most optimistic (initial) predictions." While progress is being made, it has been harder and slower than anticipated, Petraeus told the Senate Armed Services Committee during his confirmation hearing.

The audio message criticizes media coverage of the operation in Marjah, saying, "They made a big deal when they covered the Marjah battle ... but later on, they didn't want to report what was really happening on the ground, that the Mujahedeens were winning."

The speaker says the relationship between al Qaeda and the Taliban is stronger than ever -- an apparent reaction to reports that suggested the United States might be willing to deal with the Taliban if it distanced itself from al Qaeda. The message pledges al Qaeda's allegiance to Taliban leader Mullah Omar, calling him "the commander of the faithful."

Bin Laden and al-Zawahiri are believed to be living in the tribal areas of Pakistan, near the border with Afghanistan.

We will show you who will be soon fleeing Kabul, in defeat, fear and humiliation.
--Ayman al-Zawahiri
RELATED TOPICS

The speaker goes on to mock U.S. President Barack Obama and warns him that the United States will be defeated in Afghanistan and other Jihadi fronts. "Poor Obama came to Kabul and vowed that Taliban will never be back in power ... We will show you who will be soon fleeing Kabul, in defeat, fear and humiliation."

The speaker also blasts Arab leaders as "Zionists" in disguise for supporting Israel over Gaza and the war in Afghanistan. Zawahiri challenges the Muslim nations, including Egypt and Jordan, for supporting the war in Afghanistan and Iraq by sending Muslim troops to fight the Mujahedeen and providing intelligence services in order to capture and kill al-Qaeda operatives all over the world.

"They were clearly exposed by the heroic work of Abu Dajana Al-Khorasani," the message says, referring to the man believed to be the suicide bomber who killed seven CIA operatives and a Jordanian army captain on December 30 at a U.S. base in Khost, Afghanistan.

Criticizing the leadership of Egypt, Jordan, Saudi Arabia and the Palestinian Authority, the speaker says, "The Arab Zionists that we deal with on a daily basis are much worse than the Jewish Zionist because they are the true traitors who constantly stab us in the back and the wounds only get deeper and deeper by the hour. They are much more dangerous than the Jewish Zionists."

The message is the first purportedly from Zawahiri since May, when Al-Jazeera aired an audio message offering brief condolences to Muslims over the recent deaths of two top Iraqi militants. The Arabic-language network said the voice in the recording was that of al-Zawahiri commenting on the killings of Abu Omar al-Baghdadi and Abu Ayyub al-Masri.