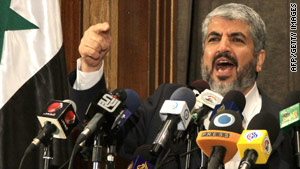 Khaled Meshaal gestures as he gives a speech in Damascus on June 28, 2010.
STORY HIGHLIGHTS
RELATED TOPICS

Yenel said he did not have details about the discussion between Davutoglu and Meshaal.

Turkey, once Israel's only Muslim ally in the Middle East, was condemned by the Israeli government when it hosted Meshaal on an official visit in 2006. Hamas had just swept parliamentary elections in the Palestinian territories. Davutoglu, then a key foreign policy adviser to the Turkish prime minister, was seen as the architect of the Hamas visit.

"So one wonders what is the point of talking to an organization that refuses and rejects the idea of solving problems through dialog," he said.

Israel and the United States both formally label Hamas a terrorist organization.