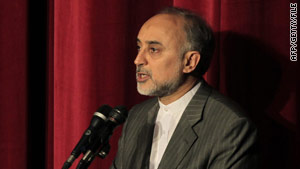 Ali-Akbar Salehi, the chief of the Atomic Energy Organization of Iran (AEOI), said as many as 50 scientists were participating in the research to break into alternative energy, Press TV said.

The process of nuclear fusion consists of forcing hydrogen nuclei to collide at high speed and fuse together, which releases energy, according to the International Atomic Energy Agency's (IAEA) website.

The goal is to eventually develop fusion plants to generate electricity, the IAEA said, but research worldwide is still in the early stages. The agency called nuclear fusion a "long term, sustainable, economic and safe energy source."

"It takes 20 to 30 years before this process can be commercialized but we have to use all the capacity in the country to provide the necessary speed for fusion research," Salehi said, according to Press TV.

Iran is under fire for other aspects of its nuclear program, which Tehran claims is for peaceful purposes. However, the United States and other Western nations fear Iran is attempting to develop a nuclear weapon.

The United Nations has issued four rounds of sanctions against the country for not being more transparent about the goals and status of its nuclear program.

Earlier this month, President Barack Obama signed into law new U.S. sanctions against Tehran that he called another step in demonstrating that "the United States and the international community are determined to prevent Iran from acquiring nuclear weapons."