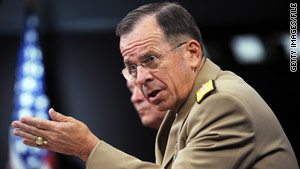 Adm. Mike Mullen, who is on a 10-day trip meeting with leaders around the world, arrived in Baghdad on Tuesday.
STORY HIGHLIGHTS

Mullen has been on a 10-day trip meeting with military and government leaders around the world, according to a statement on the Joint Chiefs of Staff website.

He came to Baghdad after visiting Afghanistan. He also visited Pakistan, India, and South Korea.

The visit is taking place during a spate of violence over the last 24 hours and as Iraqi lawmakers have yet to form a government after the March 7 elections.

A roadside bomb killed one person in Baghdad on Tuesday.

At least 25 people were killed on Monday. Two car bomb explosions on a road between Karbala and Najaf killed 19 people and wounded 52, most of whom were Shiite pilgrims walking on the road toward Karbala to mark the Shaabaniya holiday.

In Baghdad, a suicide bomber drove a bus into the compound of Saudi-funded al-Arabiya TV in central Baghdad, killing at least six people and wounding 20, officials said.

The political stalemate comes at a critical period for Iraq, where the United States is in the process of drawing down its seven-year-old presence to a non-combat force of 50,000. And though accustomed to the slow pace of their politicians, Iraqis are increasingly weary of a way of life governed by a lack of basic services and security.

Prime Minister Nuri al-Maliki's Shiite Muslim-dominated State of Law coalition, but neither slate won a big enough share of the 325-seat Council of Representatives to form a new government.

The result has been more than four months of jockeying for power between the two men and their supporters, with al-Maliki attempting to stay atop an alliance of Shiite parties and win a new mandate.

Allawi -- who served as the head of Iraq's interim government following the 2003 invasion -- predicted the impasse will last through August, perhaps as late as October, leaving Iraq unable to deal effectively with major issues such as security after the ongoing U.S. withdrawal.