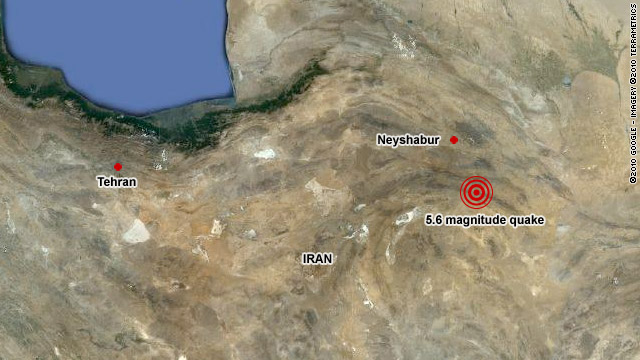 The agricultural city of Torbat-e Heydarieh, at the epicenter, was rocked for about 10 seconds, the Islamic Republic News Agency reported. Most of the damage was seen in the surrounding 70 villages outside the city, some of which saw roughly half their houses affected, IRNA said.

Twelve people have been critically injured and hospitalized, IRNA reported. Police were attempting crowd control at the hospital in Torbat-e Heydarieh, which was packed with people searching for loved ones.

"There were no immediate reports of any mortalities in the earthquake," said Torbat-e Heydarieh Gov. Mojtaba Sadeqian, according to state run Press TV. "However, it is widely believed that a large number of people are trapped under the rubble, and the casualties are expected to be high."

The news agency said the city has already reported scores of livestock deaths from Friday's quake.

Iran lies on a series of seismic fault lines and has experienced devastating earthquakes -- most notably in December 2003, when a 6.6-magnitude quake devastated the ancient city of Bam in southeast Iran, killing at least 30,000 people.

In 2008, a strong earthquake measuring 6.1 in magnitude struck in Hormozgan, demolishing nearly 200 villages and killing at least six people.