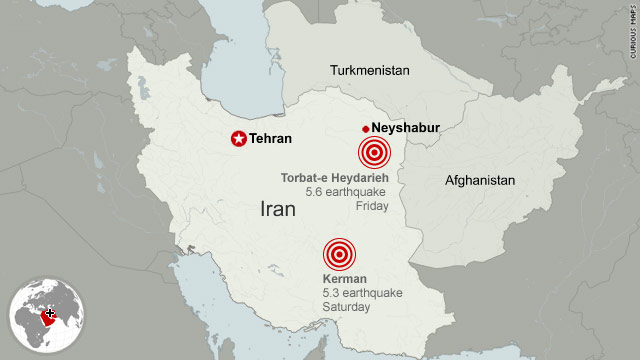 There were no immediate reports of damage or injuries from Saturday's earthquake that struck about 60 miles (95 kilometers) south of Kerman, the USGS said.

Friday's magnitude 5.6 earthquake rocked the northern agricultural city of Torbat-e Heydarieh for about 10 seconds, the Islamic Republic News Agency reported. Three villages in the city and 10 others nearby were damaged, and 170 people were injured, IRNA said.

There was concern Saturday because the Torbat-e Heydarieh quake has produced no aftershocks. Mahmoud Mozaffar, the head of the Red Crescent Society's Rescue Division, told IRNA that could mean a larger earthquake is imminent.

The Red Crescent set up 300 tents in Torbat-e Heydarieh to house those whose homes were damaged or destroyed.

Iran lies on a series of seismic fault lines and experiences earthquakes almost daily. At times they have devasting consequences, most notably in December 2003, when a 6.6-magnitude quake devastated the ancient city of Bam in southeast Iran and killed at least 30,000 people.

In 2008, a 6.1-magnitude earthquake struck in Hormozgan, demolishing nearly 200 villages and killing at least six people.