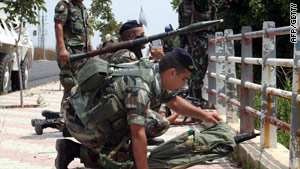 Lebanese army soldiers monitor movements across the border with Israel on Tuesday as UNIFIL trroops look on.

Beirut, Lebanon (CNN) -- A clash between Lebanon and Israel along their volatile shared border Tuesday left an Israeli officer and several Lebanese soldiers dead while escalating fears of renewed violence between the nations.

Lt. Col. Dov Harari, a battalion commander, was killed in the fighting, according to an Israel Defense Forces statement. Another Israeli soldier was seriously wounded, it said.

A Lebanese army spokesman said at least two Lebanese soldiers were killed and several others were wounded.

In a statement, the spokesperson for Secretary-General Ban Ki-moon said the United Nations Interim Force in Lebanon "took immediate steps through contacts with the parties and the presence of the acting force commander alongside peacekeepers at the location to help restore calm in

UNIFIL will investigate the incident, it said, adding that Ban "urges the parties to exercise maximum restraint and to work with UNIFIL and the U.N. Special Coordinator for Lebanon in taking steps to consolidate the calm now restored in the area."

Israel said the Lebanese fired on Israeli soldiers who were on the Israeli side of the border.

In Jerusalem, Israeli Intelligence Minister Dan Meridor said the incident was captured on video and that it all occurred on Israeli soil.

"This is all under Israeli sovereignty," he said. "Somebody wanted to ignite fire and kill one of our soldiers and wound another. We responded in a military way. But this should serve as a warning: Don't dare do this again."

Israeli Defense Minister Ehud Barak warned the Lebanese government against continuing provocations of Israeli forces and demanded an investigation into Tuesday's violence. He said Israel would not tolerate attacks on Israeli territory.

"The IDF will continue to act firmly and determinedly to protect the residents of Israel and the sovereign borders of Israel," Barak said in a written statement.

The Israeli military said its soldiers were on "routine activity" when the incident occurred. It issued a statement saying that the soldiers were in "an area that lies between the 'blue line' [the internationally recognized border between Israel and Lebanon] and the security fence, thus within Israeli territory."

The Lebanese army's account and a report from Lebanese media said, however, that the hostilities occurred when Israel wanted to remove a tree.

A Lebanese army unit stopped the Israelis, and the U.N. Interim Force in Lebanon intervened, the National News Agency said.

The Lebanese army said it asked the U.N. force to arbitrate the issue, but the Israeli forces didn't comply and entered Lebanese territory. That led the army to open fire, with Israeli forces returning artillery fire and hitting a house in the village of Odaise.

But Lebanese President Michel Suleiman said Israel violated U.N. Resolution 1701 in crossing the blue line and by bombing a Lebanese army checkpoint in Odaise. He said Israeli aggression needs "to be confronted, whatever the sacrifices are" and that he will pursue the issue diplomatically.

Israel fought a five-week war with Hezbollah in summer 2006 after Lebanese-based militants kidnapped two Israeli soldiers during a cross-border raid.

Resolution 1701, which was intended to resolve the 2006 conflict, bars Israel from conducting military operations in Lebanon. Israel has accused Lebanon-based Hezbollah, considered a terrorist group by the United States, of violating the resolution by smuggling arms into southern Lebanon.

In a televised speech marking the fourth anniversary of the war, Hezbollah Secretary General Hassan Nasrallah accused Israel of never having stopped its attacks on Lebanon and said it is guilty of 7,000 violations of Resolution 1701.

"We salute the Lebanese army and we salute their commander, their soldiers and their officers for baptizing the land with their blood," Nasrallah said. "Our young men were in Odaise and other neighboring villages in the south but we asked them to exercise restraint. We were ready to fight and defend our land."

In the aftermath of the 2006 fighting, the United Nations deployed peacekeepers to the area. The U.N. troops were focused Tuesday on restoring calm, said spokesman Neeraj Singh.

"This aggression proves once more," he said, "that Israel has always been seeking to destabilize security and stability in Lebanon and the region."

In Washington, the Obama administration expressed concern about the clashes and urged both sides to exert calm while the United Nations investigates.

State Department Spokesman P.J. Crowley told reporters the State Department was in touch with the Israelis, Lebanese and the UNIFIL, the United Nations mission on the ground, to establish the facts.

But Hezbollah leader Nasrallah predicted any U.N. investigation would not favor Lebanon.

"Israel wasn't condemned for massacres that they have committed," he said. "The U.N. will not condemn their aggression in Odaise."

Still, he predicted, the incident is not likely to turn into another war. "I don't believe that there is a likelihood of a[nything] close to war but there is reason for concern," he said.

Nasrallah further accused Israel of involvement in the 2005 assassination of Lebanese Prime Minister Rafiq Hariri in Beirut. He promised to present evidence of Israel's involvement to reporters on Monday. "We officially accuse Israel in Hariri's assassination," he said. "We will expose the true killer."

To that, Israel's Meridor was unequivocal. "It is ridiculous," he said. "It's not the first time that he says lies. It's easy for him."