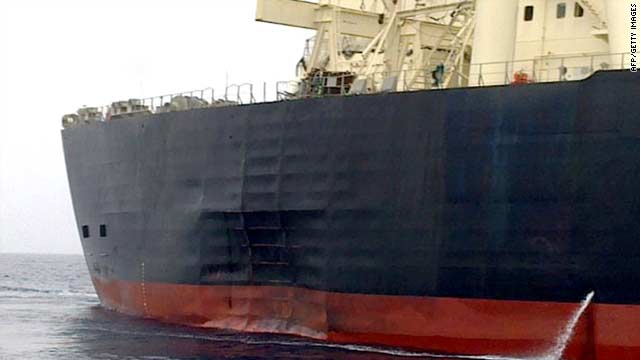 (CNN) -- A militant Islamist group has claimed responsibility for the explosion aboard an oil tanker in the Strait of Hormuz near Oman last month.

In a statement posted on various websites that regularly carry messages from al Qaeda leaders, the Abdullah Azzam Brigades included a picture of a man they claimed carried out a suicide attack on the tanker on July 28.

The group said the attack was intended to "strike an economic blow to the infidels."

CNN was not immediately able to authenticate the claim.

The group, said to be inspired by al Qaeda, is believed to be behind several attacks in the Middle East, including the October 2004 attack on a hotel and nearby camp sites in Egypt that killed more than three dozen people.

The statement from the Abdullah Azzam Brigades said the attack on the tanker was the "conquest of Sheikh Omar Abdel-Rahman" -- a reference to the imprisoned blind cleric who inspired the 1993 World Trade Center bombing in New York.

"In a blessed episode of our Jihad in the name of God and in order to weaken the global infidel network, a battalion from our Jihadi brethrens managed to carry out an operation in order to strike an economic blow to the infidels," the statement said.

"After midnight on last Wednesday, the hero, the martyrdom seeker Ayoub Tayshan, blew himself up in the Japanese tanker M. Star in the Strait of Hormuz between the United Arab Emirates and Oman causing damages, that were reported all over the international media outlets. This heroic operation will have a major effect on the global economy and the oil prices."

The day after the July 28 blast, the owner of the Japanese-owned, Marshall Islands-flagged M. Star said the ship suffered hull damage caused by an explosion which "seemed to be an attack from external forces."

But Capt. Musa Murad, director of the port of Fujairah in the United Arab Emirates, gave a different account of the incident.

He told WAM, the state run news agency, that the tanker was passing through the strait when it was exposed to a high wave as a result of an earthquake shock.

The Brigades, in its message, made mention of the UAE account.

"The enemies of God wanted to hide the truth of what happened in this operation and some even tried to explain it by saying there was a strong earthquake. But indeed, our martyrdom-seeker shook the grounds underneath them by reaching his precious goal, proving to the global infidels again that the guardians of God -- the Mujahedeen -- will open the most difficult doors with God's blessing, and nothing will stop them -- no security system nor the intelligence service."

The M. Star was bearing two million barrels of oil, according to the port of Fujairah marine department. The tanker with 31 crew members -- 16 from the Philippines and 15 from India -- on board, was heading to the port of Chiba, Japan.

The Strait of Hormuz is a narrow body of water between Oman and Iran, leading from the Gulf of Oman to the Persian Gulf.

An Omani enclave sits on the southern coast of the strait.