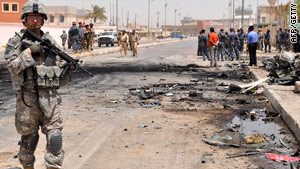 Baghdad, Iraq (CNN) -- The Iraqi government said Thursday it was not looking into renegotiating a deadline for all U.S. troops to withdraw from Iraq by end of next year.

Government spokesman Ali al-Dabbagh told CNN that although the Iraqi Army might not be fully ready to handle security by end of 2011, that does not mean the alternative would be keeping U.S. troops longer.

His remarks came in response to public comments made a day earlier by the chief of staff of the Iraqi Army, Gen. Babakir Zebari, who according to media reports, said the United States should not completely pullout by the 2011 deadline and that the army will not be fully ready for another ten years.

The deadline was set by a security agreement negotiated by the United States and Iraqi governments in 2008 that governs the presence of U.S. forces in Iraq. The agreement, which stipulates that all American forces will be out of Iraq by December 31, 2011, also leaves room for both sides to renegotiate it's terms.

Al-Dabbagh said Zebari's comments are not based on any government decisions or intentions to reconsider next year's deadline, but were an expression of his views from a military and technical perspective.

While Iraqi officials have said that the army can take over security responsibilities from U.S. troops, they have also cautioned that it will need years to reach the level of readiness to defend the country against external threats.

Al-Dabbagh said that one alternative could be a diplomatic one where Iraq could sign non-aggression and interference security pacts with neighboring countries.

Many Iraqis have been concerned about the country's future amid political uncertainty, a spike in violence and the U.S. military's ongoing drawdown.

Current U.S. troop levels are at just under 60,000 troops compared to a peak of about 170,000 during the 2007 surge. The military is continuing it's drawdown ahead of President Barack Obama's August 31 deadline for ending all combat operations and keeping a residual force of 50,000 with a mission limited to stability operations and advising and assisting Iraqi security forces.