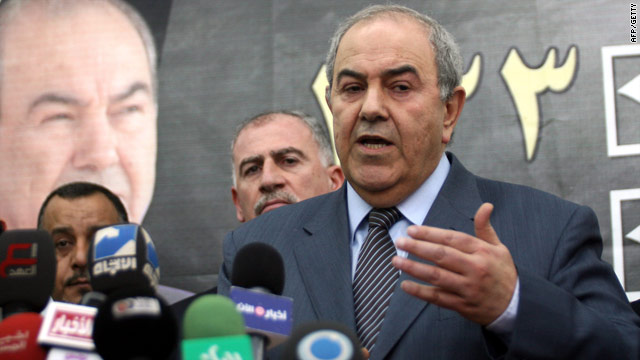 Maysoon al-Damalouji, a spokeswoman for al-Iraqiya, told CNN the group decided to suspend negotiations after al-Maliki described Allawi's candidate list as a "Sunni list" in an interview aired Monday by the U.S.-funded network Alhurra.

Al-Damalouji said they were demanding an apology to the supporters of al-Iraqiya.

Allawi, a secular Shiite, heads the cross-sectarian al-Iraqiya list, which won the largest number of seats in the inconclusive March 7 national elections. Al-Iraqiya garnered most of the Sunni-Arab vote.

More than five months after the vote, the four top blocs are involved in weeks-long negotiations to try to build a coalition with enough seats to form a government.

A fragile mega-Shiite coalition was formed in May between al-Maliki's State of Law and the Iranian-backed Iranian National Alliance, which includes the followers of radical Shiite cleric Muqtada al-Sadr, but the coalition collapsed this month after the INA rejected al-Maliki's nomination for a second term.

Allawi and Maliki both claim the right to lead the next government. The two blocs have been holding talks.

To form a government, a 163-seat majority of 325 seats in parliament is needed.

Allawi's mainly secular al-Iraqiya bloc, which gathered most of the Sunni support, had a narrow victory with 91 seats, while al-Maliki won 89.

Sunnis largely boycotted the 2005 elections, leading to the emergence of a Shiite-led government. The move left the once-ruling minority feeling alienated, contributing to a bloody insurgency and a sectarian war that gripped Iraq for years.

Many Iraqis have blamed a recent wave of violence on the current political crisis. This comes as U.S. forces continue their drawdown ahead of President Barack Obama's August 31 deadline for ending all combat operations. A residual U.S. force of 50,000 troops would have a mission limited to stability operations and advising and assisting Iraqi Security Forces.