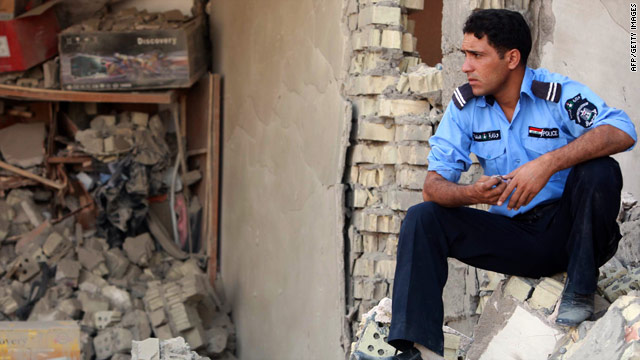 Editor's Note: Arwa Damon is one of CNN's Iraq specialists and has reported extensively on events in Baghdad.

Baghdad, Iraq (CNN) -- "It's so bad, the security situation is so bad in Baghdad, Arwa, it really is you have to believe me," one of our maintenance staff said to me, his eyes welling with tears.

In all my years here, even when the violence was at its worst, I have never seen him so distraught -- about a week ago.

The most recent killing had been that morning. An 18-year-old murdered and his sister wounded. Their father was in the south for the anniversary of the death of his father, who was killed in a roadside bombing a year ago. While the father was away, gunmen stormed into the house and shot the kids. The father says he does not know why and the gunmen have not been found.

"We accept that we don't have [electrical] power, we can deal with the lack of clean water," the maintenance man said. "But the security, the security, we can't handle this anymore."

He stepped in closer as if he was sharing a secret, his eyes pleading for an answer, a solution, an end.

"When I ride my motorbike I am always checking left and right. In the street I am always looking around me," he whispered. "You just don't know anymore, the person next to you could kill you."

That kind of talk was common during what Iraqis call the "dark years" when the sectarian warfare was at its worst and al Qaeda and other extremists controlled swaths of the country.

It was a time when every night we would get the "unidentified body count" from the authorities; a time when Iraqis would travel with two IDs -- one Sunni, one Shia.

People had to watch what they said and where they said it for fear of the consequences. Neighbors turned on each other as society disintegrated and gave birth to an evil that took many by surprise.

And here, it seems the talk and whispers are coming back -- even though violence is far below its peak.

Iraqis have felt a level of optimism, of hope, most recently after the elections in March. But now, five months on with no new government formed and U.S. troop withdrawals, that seems to have died.

Baghdad is grimmer than I have ever seen it. But it's different from those "dark years." It is a different type of despair that seems to have settled on the capital.

Many Iraqis say it's because they feel everyone is failing them, from the Americans to the Iraqi politicians.

There was much fanfare and media attention surrounding the departure of the last U.S. combat convoy -- as if the war was somehow suddenly over and Iraq had transformed into a peaceful, prosperous country. That come August 31, the 50,000 U.S. troops remaining in country to "advise and assist" Iraqi forces would be able to cast aside their weapons, armor, flak vests and helmets.

As fellow journalist Nir Rosen put it: "It's not like the U.S. military is going to be running around with fly swatters and mace."

The U.S. will "officially" have a "noncombat" mission in a war zone. This remains a country where Westerners can't walk through the streets without fear of being kidnapped and beheaded.

People often joke: "You know the war is over, right?"

It's survivalist black humor. The kind Iraqis know all too well. The kind those of us who have been here for a while developed, though we never mastered it as well as our Iraqi friends and colleagues.

The kind that is bred out of desperation, out of the knowledge that you have to laugh, you have to keep it together because you don't have a choice.

Iraqis have survived so much, and now many fear the situation is deteriorating. Maybe not to the degree of the "dark years," but enough for the whispers to come back.

Less than a week after that departing U.S. convoy drove through the border gates, the U.S. military put out a press release: A U.S. Forces-Iraq soldier was killed today in Basra while conducting operations in support of Operation Iraqi Freedom. The name of the deceased is being withheld pending notification of next of kin and release by the Department of Defense.

And militants Wednesday launched a wave of bombings across the country, mostly targeting security forces. At least 48 people died and at least 286 others were wounded in 13 cities.

People are still dying here. A friend and fellow journalist said last week as he walked into the newsroom: "Another killing in my neighborhood last night. Gun. With silencer." He counted on his fingers; that's the third killing in four days.

"Who are they targeting?" I asked.

"It's all government, government officials. These assassinations are really worrying me," he said.

"You have to be careful," I responded.

"Careful? Ha! How? You know we Iraqis, we have many differences. But there is one thing that we all agree on, and that is that we want security and stability. Power is second."

He turned and walked away. It's deep sorrow. And it's not over.