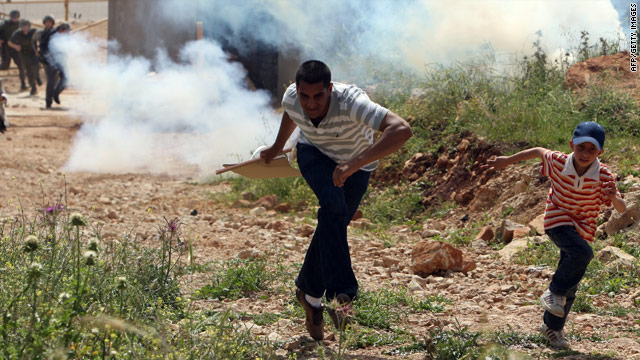 A Palestinian man and a boy run from Israeli soldiers during protests in the West Bank village of Nilin in March 2010.
STORY HIGHLIGHTS
RELATED TOPICS

(CNN) -- An Israeli military court has found the leader of a West Bank protest movement guilty of incitement and organizing illegal demonstrations.

In a move strongly criticized by the European Union, the court convicted Abdallah abu Rahmah of organizing weekly protests against the route of what Israel calls its security barrier and what Palestinians call the apartheid separation wall.

"The individual was convicted of incitement and participation in an illegal riot," the Israeli military said.

But the organizers of the protest say it is a grass-roots nonviolent movement.

Catherine Ashton, EU High Representative, said the union considers abu Rahmah to be a "human rights defender" and she was "deeply concerned that the possible imprisonment of Mr Abu Rahma(h) is intended to prevent him and other Palestinians from exercising their legitimate right to protest against the existence of the separation barriers in a nonviolent manner."

Hundreds participate in the popular campaign against the wall every week. Protests in the West Bank village of Bil'in started five and a half years ago.

Residents say the wall cuts them off from their farmlands and is a land grab. Israel says they need the barrier for their security.

The Israeli supreme court originally ruled in September 2007 that part of the fence near the West Bank village of Bil'in was illegal and needed to be moved to give residents some of their farmland back.

The Israeli Defence Force told CNN the work to move the fence started in February 2010, but residents say none of the fence has been moved.

Charges against abu Rahmah of throwing stones during the demonstrations were dropped.

Abu Rahmah had collected tear gas canisters and weapons Israel used against the demonstrators, and made an exhibition of them in his garden.

The Israeli military then charged him with weapons possession, a charge the court also threw out.

Organizers, backed by Prime Minister Salam Fayyad, say nonviolence is their best weapon to increase international pressure on Israel to end its occupation.

But some Palestinian youth throw stones at the Israeli military during the protests, and the military fire stun grenades, tear gas canisters, rubber bullets and sometimes live rounds.

Depending on the day, it has been both the military and the youth who have instigated the violence.

Organizers of the popular struggle say they are unable to control youth who use their protest to throw stones.

Six protesters have been killed in Bil'in and the neighboring village of Nilin in the past 18 months, and hundreds have been injured, according to protest organizers.

Israel says hundreds of its military have been injured by stones.

Gaby Lasky, who is defending abu Rahmah, said Israel was increasingly cracking down on the nonviolent protests.

"Since they haven't been able to do so by violent means, they have decided to use the legal path in order to incarcerate all the leaders of the nonviolent protest and hope that in this way they will put an end to the demonstrations."

Israel says that the protests are illegal and insist they only arrest those who are involved in violence against Israeli troops.