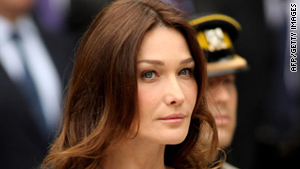 (CNN) -- A hard-line Iranian newspaper has called the French first lady a "prostitute" and recommended she be put to death for supporting a woman sentenced to death by stoning in Iran for adultery.

Under the headline "French prostitutes enter the human rights uproar," the Kayhan daily newspaper referred Saturday to Carla Bruni-Sarkozy as a "prostitute" after she released an open letter in support of Sakineh Ashtiani, 43, a mother of two whose case has drawn international attention.

Kayhan, a newspaper headed by a representative of Supreme Leader Ayatollah Ali Khamenei, reiterated those statements Tuesday, writing that, "this woman with a bad history supports an Iranian woman who has committed adultery during marriage and is an accomplice to the murder of her husband who is sentenced to death, and in fact she [Bruni-Sarkozy] also deserves death."

"Insulting the authorities in other countries and using inappropriate words is not approved by the Islamic Republic," Foreign Ministry spokesman Ramin Mehmanparast told reporters Tuesday in response to a question during his weekly briefing, according to the ministry's website.

"The media can criticize the policies, attitudes and comments of other countries' officials, they can object to them, we call for them to review their deeds, but we do not think applying insulting and degrading words is the right thing to do."

In her open letter, published on Bruni-Sarkozy's website, the former model said, "Condemned to be buried alive, and then stoned to death! Your beautiful face, reduced to a pulp! Your eyes full of sorrow and dignity, your forehead, your mind, your soul, transformed into a target for the stone throwers, exploded, pulverized, in shreds! Horror and consternation!"

She added, "Your judges must know, Sakineh, your name has become a symbol the world over. Let us hope they may understand that, no matter what the time or the place, they shall never be able to wash their hands of such a crime."

Bruni-Sarkozy said she is proud to live in a country that has abolished the death penalty, adding that she was praying that Iran would find a way to show clemency in her case.

"In France, schoolchildren learn that mercy is the greatest virtue of those who govern," she said. "In the depths of your cell, know that my husband will plead your cause unfailingly and that France will not abandon you."

France has asked the European Union to come up with new approaches to get Iran to stop the pending execution.

"We need to encourage the Union in initiatives to remind Iranian authorities that, as well on the nuclear file, their attitude of isolation has a price, which they can liberate as soon as they choose a more responsible behavior and more in line with their international commitments on the subject of human rights," Kouchner said in a letter to Ashton published in the French press.