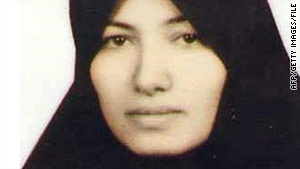 Tehran, Iran (CNN) -- In an interview purportedly with the Iranian woman sentenced to be stoned to death for adultery, she quelled "rumors" that she had been lashed 99 times for another alleged offense.

A woman identified as Sakineh Mohammadi Ashtiani told the state-run Islamic Republic of Iran Broadcasting on Wednesday that reports were untrue she had been punished for a published photo of a woman without a headscarf.

"These are all lies and rumor," sadi Ashtiani, whose images in the video footage were blurred.

"By no means have I been tortured," she said. "These are all my own words, and no one has forced me to come in front of the camera."

Iranian law requires all women to cover their hair, regardless of their religion. The Times of London ran the photo on its front page on August 28, identifying a woman in it as Ashtiani. It later apologized, saying it misidentified the woman.

The interview, apparently conducted from prison, is the latest in the saga involving the stoning sentence for Ashtiani.