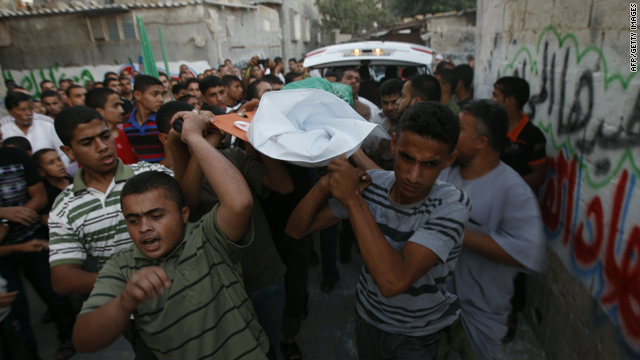 Palestinian mourners carry the body of Wajdi al-kadi, who was killed in an Israeli airstrike on tunnels near Rafah Wednesday.
STORY HIGHLIGHTS

The sites were in northern and southern Gaza, according to the Israel Defense Forces.

"The attack is in response to the nine projectiles fired into Israeli territory over the last 24 hours," the IDF said in a statement. It said 14 such attacks have occurred since Sunday.

The violence comes amid fresh Middle East peace talks, which opened in Egypt on Tuesday and continued Wednesday in Jerusalem.

"Over the past few days, we have witnessed an increase in attempts by terrorist organizations to attack using rockets in the area surrounding the Gaza Strip, in light of the progress of political negotiations," Israeli Brig. Gen. Eyal Eisenberg said Tuesday.

"The Hamas organization controls the area, and we hold it accountable for everything that takes place there," he said. Hamas is not taking part in the talks.

More than 150 rockets and mortars have been fired at Israeli territory since the beginning of 2010, the Israeli military said.