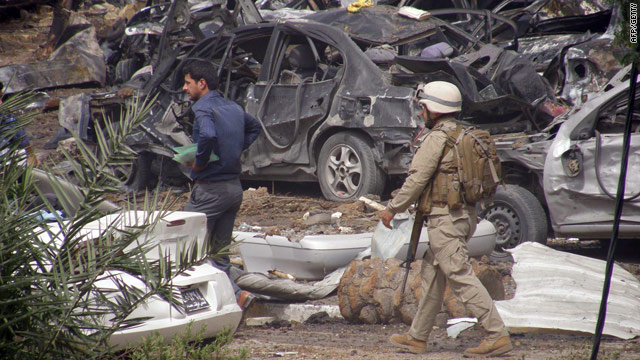 Baghdad, Iraq (CNN) -- At least 36 people were killed in attacks across Iraq on Sunday, including 29 who died after two large car bomb explosions rocked the country's capital, officials said.

The bombings in Baghdad and another car bomb blast in Fallujah also left at least 128 people wounded.

Police and hospital officials in Fallujah said the car bomb there targeted an Iraqi Army patrol and killed five people, including two Iraqi soldiers. At least 14 people were wounded in the incident, including bystanders and another Iraqi soldier.

Earlier Sunday, at least 10 people were killed and 58 were wounded in Baghdad when a bomb blew up a minibus outside one of the main offices of the Asiacell mobile phone company. Clients and company employees were killed and injured in the blast, police said.

Another car bomb blast at an intersection in the Kadhimiya neighborhood in northwestern Baghdad killed at least 19 people and wounded 53 others, police said.

Both blasts occurred around 10:15 a.m. (3:15 a.m. ET), police said. Most of those killed or injured were civilians, according to police.

Separately, a driver and his son were killed by a sticky bomb attached to their minibus while they were driving on a highway in western Baghdad Sunday morning. And a roadside bomb explosion in the Nahdha commercial area in central Baghdad wounded three civilians.

The series of explosions came hours after Wisam Amjad, an officer with Iraq's interior ministry, was killed by a sticky bomb attached to his vehicle in southwestern Baghdad Saturday night.

Although violence levels in Iraq have dropped significantly over the past two years, there has been a recent spike in explosions.

Iraqi politicians have been unable to form a government, and officials have expressed concerns that insurgents would take advantage of the political vacuum to try to reignite the sectarian bloodshed that gripped Iraq for years.