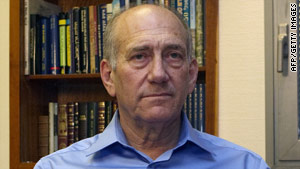 "The United States was ready to take in 100,000 refugees as citizens of the United States," Olmert said, in what may be his most revealing comments to date about negotiations with the U.S. and the Palestinians when he was prime minister.

Olmert, who led Israel from 2006 to 2009, spoke weeks after direct talks between the Israelis and the Palestinians resumed in Washington.

Speaking in Tel Aviv, Israel, to a group called the Geneva Initiative, Olmert also said Sunday that he was prepared as prime minister to share Jerusalem's holy sites, which include the Western Wall and the Temple Mount -- known to Muslims as Haram-al-Sharif -- with the Palestinians.

"It will not be ours nor the Palestinians... (it) will be managed by an international trustee which includes (other) countries," Olmert said, describing his vision for the area known as the Holy Basin. "Israel is one of them, the Palestinians are there, the Saudi Arabians, according to my offer, the Jordanians and the Americans. This is a trust fund of five countries."

"This trust is going to ensure the freedom of access to all the holy sites to any Jew, to any Muslim, to any Christian," he said.

Also Sunday, Netanyahu said he does not plan to extend a moratorium on settlement-building in the West Bank, despite a Palestinian threat to walk away from peace talks if building resumes.

Secretary of State Hillary Clinton is also pushing for a new three-month moratorium on Israeli building on land which the Palestinians consider theirs, a diplomatic source said Thursday.

But Netanyahu told leaders of his Likud party that there has been no change in Israel's position, sources familiar with the talks said.

The settlement freeze is due to expire September 26.

The Palestinians have said that if the moratorium ends and building resumes they will walk away from peace talks, which recently resumed after an 18-month hiatus.

The two sides appear to be at a stalemate, the source said.

But Olmert said Sunday that he is hopeful about the new round of talks.

"We have a peace proposal, and I believe that it may bring about a peace accord between us and the Palestinians in a short time," he said.

"The mere fact that the government of Israel agreed to take direct talks even when it causes pain to the government this means that it is courageous," he said. "Maybe it's the beginning of an understanding that there is no other choice."