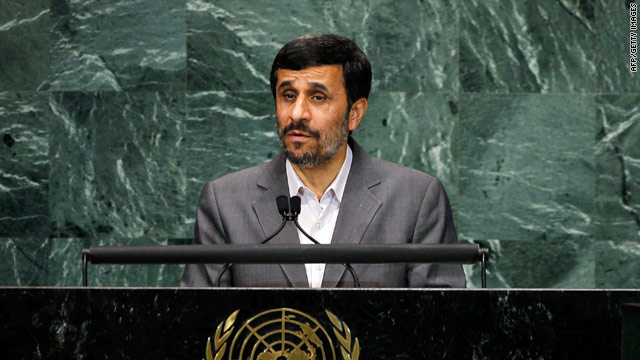 "The demanding liberal capitalism and transnational corporations have caused the suffering of countless women, men and children in so many countries," Ahmadinejad said at a U.N. General Assembly session on the Millennium Development Goals.

"It is my firm belief that in the new millennium, we need to revert to the divine mind-set, to our true nature for which man was created and, indeed, to the just and fair governance," he said.

At past global conferences, Ahmadinejad's strong words against Israel have prompted world leaders to walk out. But the hard-line Iranian leader's comments Tuesday were relatively tempered.

"Now that the discriminatory order of capitalism and the hegemonic approaches are facing defeat and are getting close to their end, all-out participation in upholding justice and prosperous interrelations is essential," he said.

Ahmadinejad is on a public relations offensive this week in New York, addressing the session on tackling world poverty, giving interviews and speaking again Thursday in the assembly's general debate.

On Wednesday he will appear on CNN's "Larry King Live."

His visit coincides with the homecoming of American Sarah Shourd, who was accused of spying against Iran and detained in a Tehran prison for 14 months.

Ahmadinejad has suggested the Obama administration ought to return the humanitarian gesture by releasing Iranians he says were illegally arrested and detained in the United States. The United States says the cases are not related.

His appearance at the United Nations comes just three months after the Security Council imposed tough new sanctions on Iran to try to force it to suspend its nuclear program. Iran is also under global scrutiny for alleged human rights violations in a crackdown on dissent following last year's disputed elections that returned Ahmadinejad to the presidency.

The summit on the Millennium Development Goals is assessing the successes of eight measurable goals set a decade ago that were intended to help halve extreme poverty and alleviate hunger and disease by 2015.

As global leaders try to figure out how to get those anti-poverty goals back on track, protesters have been voicing their opposition to Ahmadinejad.

Outside his hotel, critics want the management to kick him out of his room. "Blood on his hands, blood on your pillows," an online petition publicizing a protest there said. A major demonstration is planned for Thursday.