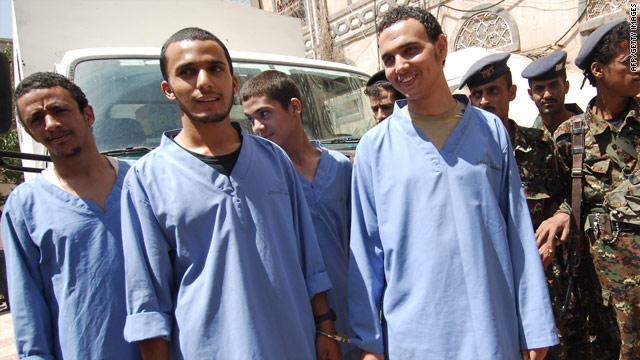 The Yemeni government "dispatched forces backed by heavy weaponry, jets and choppers to surround a mountainous area," said the official, who asked for anonymity because he is not authorized to speak to the media.

The official said the offensive was in response to a militant attack last week on a pipeline carrying liquefied natural gas. The official described the multibillion-dollar pipeline as a "lifeline of the region."

The official added that militants have occupied homes and barricaded themselves in. He challenged claims that 80,000 people had been displaced.

A senior U.S. defense official said the U.S. military has been providing intelligence, surveillance and reconnaissance help during the offensive but stressed that Yemeni forces were primarily responsible for its planning and execution.

"The Yemeni government understands the threat within its own borders, to themselves and their people," the defense official said.

The Yemeni government has been fighting a growing al Qaeda element in Yemen called al Qaeda in the Arabian Peninsula. The militant offshoot group grabbed the attention of the West with the attempted bombing of a Northwest Airlines trans-Atlantic flight as it landed in Detroit, Michigan, on December 25.

The suspect, Umar Farouk AbdulMutallab, who has pleaded not guilty to six federal terrorism charges, was reportedly trained and armed in Yemen.

Since its inception in January 2009, al Qaeda in the Arabian Peninsula has claimed responsibility for numerous terrorist attacks against Saudi, Korean, Yemeni and U.S. targets.

Al Qaeda in the Arabian Peninsula leader and Muslim cleric Anwar al-Awlaki, a U.S. citizen who is believed to have prepared AbdulMutallab for his operation, remains at large.

A second government official in Yemen said he believes that al-Awlaki is probably in the province of Shabwa, where the current offensive is taking place, but stressed that the operation was not developed as a means to capture him.

"Ninety-five percent of Yemen and its government believe Awlaki is in Shabwa Province. I hope he is captured, but from what I've heard from officials, there is a lot of conflicting information at this point, and I don't believe he is surrounded right now," the source said.

The Obama administration has stepped up its attention on Yemen, and on Monday, the president's counterterrorism adviser, John Brennan, affirmed U.S. military support with Yemeni President Ali Abdullah Saleh, the U.S. Embassy said.

A counterterrorism official said the administration recognizes that "not enough is being done in Yemen" to meet the growing challenge posed by al Qaeda in the Arabian Peninsula.

"We need to scale up efforts to disrupt the group," said the official, who spoke about sensitive issues on the condition of anonymity.

The official said that conditions in Yemen have allowed al Qaeda to regroup there and that all options to fight the Arabian Peninsula group are under review at the White House.