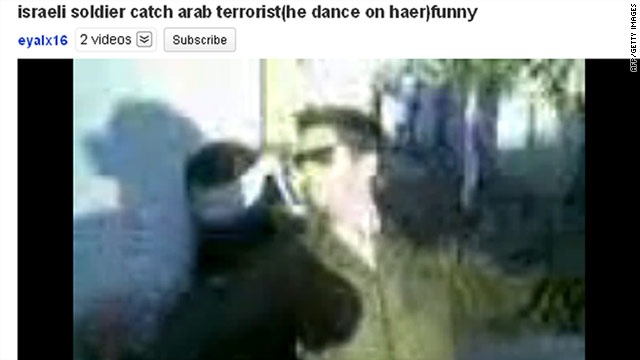 Video surfaced on YouTube showing what appears to be an Israeli soldier dancing around a blindfolded Palestinian prisoner.
STORY HIGHLIGHTS
RELATED TOPICS

Jerusalem (CNN) -- The Israeli military said Tuesday it is launching an investigation into a video that surfaced on YouTube that showed what appeared to be an Israeli soldier dancing around a blindfolded and bound Palestinian prisoner.

The video is the latest in a number of social media controversies that have engulfed the Israeli military. This summer, a female former Israeli soldier posted photos of herself posing in front of blindfolded Palestinian prisoners. The photos and her subsequent defense of her actions sparked international criticism of the military.

It was not known when the latest video was shot, but it appears to have been posted to the video-sharing website in 2008.

The clip, which first aired Monday night on Israel's Channel 10, shows a man dressed in Israeli army fatigues dancing next to a blindfolded woman.

In a statement, the Israeli military said it "denounces actions such as those depicted in the videos, and continues to make every effort to eliminate such behavior through briefings to soldiers, directives to officers, military orders, and punishment when necessary."

The statement also stressed that such incidents are "isolated cases that do not represent the IDF (Israel Defense Forces) as a whole."

Ghassan Khatib, a spokesman for the Palestinian Authority, said the video was "a disgusting illustration of the sick and hostile mentality of the Israeli soldiers serving as occupiers in the Palestinian territories."

"It should remind the whole world that it is about time to end this illegal occupation and to allow the Palestinians their basic right of freedom," he said.

In August, the pictures posted on Facebook by a female former soldier -- identified online as "Eden from Ashdod" in Israel -- prompted harsh reactions.

In one photo, she is seen smiling and sitting on a blast barrier next to a blindfolded man. In another, she is sitting in front of three blindfolded Palestinians, one with his hands tied in front of him.

The photos have since been removed from her Facebook site, but Israeli media reports the photos were labeled "IDF -- best time of my life."

Earlier this year, another video of Israeli soldiers in the West Bank city of Hebron dancing in unison to the Ke$ha song "Tick Tock" went viral.