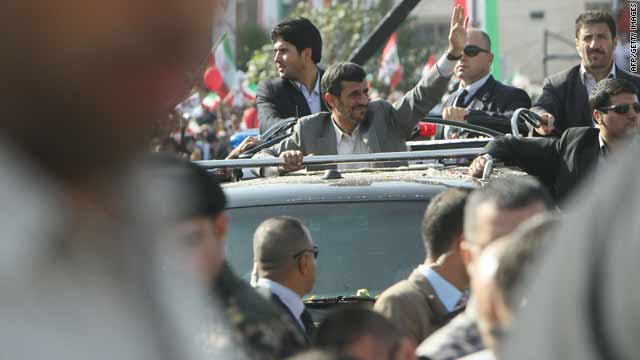 Ahmadinejad was greeted at the airport by members of parliament, government officials and Hezbollah political leaders. The streets near the airport were packed with people in a festive mood carrying Iranian and Lebanese flags.

The Iranian leader met Lebanese President Michel Suleiman at the Presidential Palace here and was scheduled to meet other leaders as well as leaders of Hezbollah's resistance movement.

The United States considers Hezbollah, which has close ties to Iran and Syria, to be a terrorist organization. The Shiite group is a political party and a major provider of social services in Lebanon, but it also operates a militant wing.

Hezbollah has boasted of numerous attacks against American, Israeli and other Western targets. Some Muslims see it as a heroic organization, successful in its stated objective of driving Israeli forces from Lebanon.

U.S. Secretary of State Hillary Clinton has expressed concern to Suleiman about Ahmadinejad's Lebanon visit, according to a State Department spokesman.

But in southern Lebanon many were happy that Ahmadinejad was coming.

That could be seen in places like the village of Bint Jbeil that had been reduced to rubble by Israeli bombings during the 2006 war between Hezbollah and Israel. The village is being rebuilt now largely do to money from Iran and Qatar.

"What he's done for this country is amazing, the bridges, the roads, the financial aid. My house burnt down, they paid me an amount for my furniture, they made up for my loss," said Mohamad Baydoun, a Bint Jbeil resident.

Iran was quick to infuse Hezbollahs coffers with cash, then handed out to residents who had lost their homes and otherwise been effected by the war.

It is also Iran that paved roads and built bridges. The mayor of Bint Jbeil emphasized just how crucial Iranian aid to his country has been.

"If it weren't for that money people may have not returned to their homes until now," Afif Bazzi explained. "The aid that Iran provided is considered one of the largest in helping rebuild after the July war, this money helped people a lot and that is why we saw people immediately returning."

Some experts say Ahmadinejad's visit is Iran's way of sending a clear message about its influence in the region, especially to the United States and Israel.

"Of course that usually is portrayed to mean that the Iranians are going to warn how much trouble they can cause, but the flip side of the message has always been, especially in recent years, look how much good we can do, look how much influence we have to help restrain things," Middle East analyst Marc Sirois said.

Iran is undeniably part of Lebanese politics, a reality that has raised concerns among those who are fearful that an increased Iranian role could destabilize Lebanon and the region and embolden Hezbollah. Analysts also point to the fact that Lebanon is the first front against Israel. "It (the visit) plays out the idea that the Iranians are a player. That in the last active front line against Israel, the Iranians are the power behind the most active and powerful political actor in Lebanon which is Hezbollah," Sirois said.

The Israeli government has not formally responded to Ahmadinejad's visit but some say they view it as provocation.

Yigal Palmor, a spokesman for the Israeli Foreign Ministry told CNN that Ahmadinejad's trip "is taking the form of a land lord coming to inspect his domain."

"Ahmadinejad makes no mystery of his view of Lebanon as Iran's border with Israel. It is quite clear that he comes to the region with malice toward all, with intention to destabilize an already volatile region at the service of the aggressive and extremist ideology of the ayatollahs," Palmor added.

The Iranian president's planned visit to areas in Lebanon bordering northern Israel has led some in Israel to call for military action.

"It is our responsibility to stop anyone who publicly calls for our destruction," said Israeli Knesset member Arieh Eldad from the far-right National Union party.

"That responsibility means us doing something and not waiting for the world to do something. If a situation arises in which Ahmadinejad is in the crosshairs of the IDF (Israel Defence Forces), he should be killed."

CNN's Jomana Karadsheh and Kevin Flower contributed to this