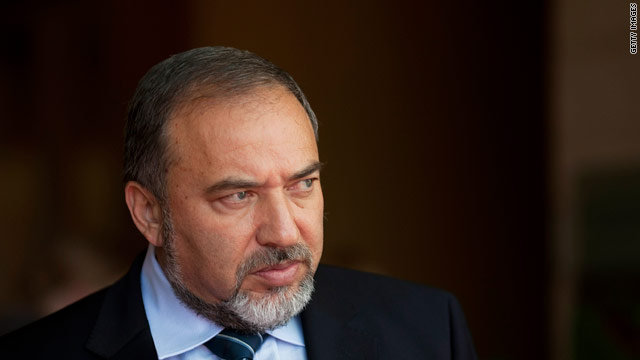 Avigdor Liberman, pictured in Jerusalem, is not known for his diplomatic style.
STORY HIGHLIGHTS

Jerusalem (CNN) -- Solve your own problems before you lecture us about ours.

That was the blunt message Israel's combative and controversial foreign minister, Avigdor Liberman, gave to counterparts visiting from France and Spain earlier this week in Jerusalem.

In comments widely publicized in the Israeli media Monday, Liberman told Spanish Foreign Minister Miguel Angel Moratinos and French Foreign Minister Bernard Kouchner that European countries needed to work on the conflicts in their own backyards before advising Israel on how to handle its decades-old dispute with Arab neighbors.

"I do expect you at least to solve problems in Europe before you come to teach us how to resolve conflicts. After you solve conflicts in the Caucasus, Cyprus, in Transnistria (a disputed region of Ukraine) or the ongoing fight between Serbia and Kosovo -- come to us and then I will be ready to accept your advice."

Liberman also wanted the visiting diplomats to know that Israel could not be pushed around like he said some European countries were on the eve of the Second World War.

"In 1938 the European community decided to appease (Adolf) Hitler instead of supporting its faithful ally Czechoslovakia and sacrificed it without receiving anything in return," Liberman told Moratinos and Kouchner, according to media reports. "I'm telling you: we will not be the 2010 version of Czechoslovakia. We will defend our essential interests."

And to make things crystal clear to the visiting diplomats, the Israeli foreign minister explained some of the faults of recent diplomatic efforts.

"It seems like the international community is trying to hide its failures to resolve conflicts in Somalia, North Korea, Afghanistan, Zimbabwe, Sudan and other places by pushing for an Israel-Palestinian agreement in one year..."

Liberman warned that the push for a quick resolution -- despite being the stated policy of Israeli Prime Minister Benjamin Netanyahu -- may, "instead of achieving quiet ... could well lead to the opposite -- it could lead to a big explosion, like it did in 2000 after the Camp David summit between (former) Israeli Prime Minister Ehud Barak and (Palestinian leader Yasser) Arafat."

An official at the Foreign Ministry acknowledged that Liberman said some things "that needed to be heard" but characterized the meeting with the two European ministers as being "very good," and denied suggestions in the Israeli media that the comments were made in anger.

Delivery style aside, they were not the most diplomatic of words from the Jewish state's foreign policy chief, but then Liberman is not known for rhetorical nuance.

Last month, Liberman shocked diplomats from around the world -- and members of his own government -- with a United Nations speech in which he called for a re-drawing of borders which would place much of Israel's Arab population in a future Palestinian state in exchange for Israel holding on to its West Bank settlement blocks.

The remarks prompted a statement from Netanyahu's office saying that the foreign minister's comments did not reflect Israeli government policy.

Liberman, who immigrated to Israel from the Soviet Union in 1978, is the leader of Israel's right-wing Yisrael Beiteinu, a nationalist party that enjoys a great deal of support from Israel's large Russian community and is the second largest member of Netanyahu's coalition government.

A former club bouncer turned politician, Liberman prides himself on a plain-spoken and take-no-prisoners style. Whether demanding Palestinian citizens of Israel swear loyalty oaths to the state, going head-to-head with Israeli religious authorities to assert a greater degree of secularism or publicly articulating foreign policy directly at odds with that of his own prime minister, Liberman has always marched to the beat of his own drummer.

His verbal bomb-throwing and hard-line domestic policy positions have long drawn accusations of racism from his fiercest critics and plaudits from his right-wing base, but his performance as the country's top diplomat is increasingly coming under fire.

In a Tuesday editorial, the liberal Haaretz newspaper castigated Netanyahu for playing politics and allowing Liberman to contribute to Israel's diminished international reputation.

"Liberman's flawed behaviour, which repeats itself, raises suspicion that the leader of Yisrael Beiteinu has transformed the foreign service of Israel into a springboard for advancing his lot in the right wing. At a time when the prime minister, ministers, ambassadors and even the president are trying to explain to leaders throughout the world that Israel seeks an agreement quickly with the Palestinians, the foreign minister does not miss a chance to present them as delusional. "

An official in the prime minister's office, who asked not to be identified because of the sensitivity of the relationship with Liberman, stressed that all national security decisions were made by Netanyahu and that the phenomena of a foreign minister espousing a completely divergent foreign policy was "not new to Israeli politics." It's the reality of coalition politics, the official said.

While disagreements between foreign ministers and prime ministers are not unheard of in the rough and tumble world of Israeli coalition politics, Liberman is charting new territory, according to Alon Liel, a former career diplomat who served as the director-general of Israel's foreign ministry.

"With Liberman, things have gotten absurd," he observes. "I don't remember a foreign minister who voluntarily excludes himself from the peace talks.

"We never had a foreign minister criticizing and contradicting the prime minister on an international platform like the U.N. assembly in such a brutal way."

Liel says there were hopes and an expectation that when Liberman took the foreign minister position he would rise above party politics and become a statesman for Israel. According to Liel, that never happened.

The result, Liel says, has been the growing isolation of the Israeli foreign ministry, a foreign minister whose positions have become "irrelevant," and a deteriorating image of Israel internationally.

A foreign ministry official refused to respond to the criticisms other than to say that the foreign minister is a consistent defender of Israel's image and national interest abroad.

Liberman is not welcome in the capitals two of Israel's most important neighbors -- Egypt and Jordan -- and he has very little dealings with the United States.

A current Israeli diplomat said Liberman's "disregard" for career diplomats was "very open" and that an increasing number of foreign service personnel were becoming "discouraged and demoralized." The source, who did not want his identity revealed, said management problems have plagued the ministry for a number of years, but "resentment" among rank-and-file employees had grown under Liberman's watch.

As much as Liberman's performance has upset diplomatic circles here, there is a belief among some that beneath the uncompromising exterior is a very practical politician.

"It is difficult to say that he is on the left of Netanyahu, but he is much more pragmatic and opportunistic than Netanyahu," says Yossi Beilin, a former Israeli deputy foreign minister and one of the architects of the Oslo peace process in the 1990s.

"So far he has supported all of Netanyahu's decisions -- the two-state solution, and then the freeze -- they accepted it," he said, referring to Liberman's party.

Acceptance of these ideas, however, does not mean the foreign minister thinks they will happen. In practice and in public comments, Liberman's attitude to the Israeli-Palestinian conflict is what one policy observer has described as "benign neglect."

Einat Wilf, a Labor parliamentarian and member of the Knesset's foreign affairs and defense committee, said that while Liberman has been able to articulate some "difficult truths," he can only be effective when he has the ear of the world and "in that respect he been a complete failure."