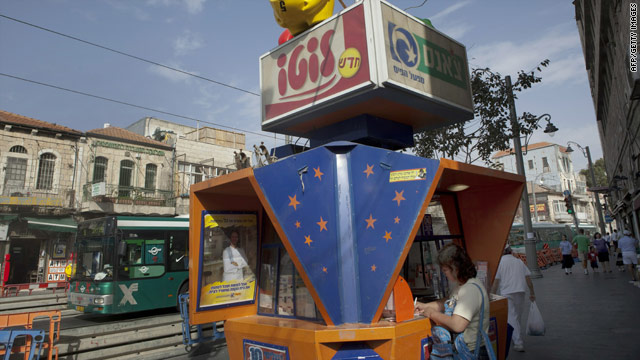 A woman buys a lottery ticket from a special kiosk in central Jerusalem on Sunday.
STORY HIGHLIGHTS
RELATED TOPICS

(CNN) -- The odds may have been in the trillions-to-one range, but lightning has indeed struck twice for some lucky lottery players in Israel.

The national biweekly lottery draw Saturday led to the astronomically improbable result of the same six double-digit balls being pulled in less than a month.

But a quick look at the results caused panic and amazement: the same first six numbers had been picked in exact reverse order and won the lottery on September 21. The only difference was the "strong number," which determines the first prize jackpot.

Anyone who played those six numbers on both dates won big -- twice.

Lottery officials at first pulled Saturday's result, fearing there was a mechanical error or some sort of tampering with the results.

That's understandable as the statistical probability of that six-number combination is normally one-in-2.65 million. But a gaming and mathematics expert interviewed by Israeli website Ynetnews set the chances that the same numbers would hit twice somewhere around four trillion to one.

"Usually, this is the type of numbers they use to describe the probability of life on Mars," Zvi Gilula, a professor of statistics at the Hebrew University said.

But after investigating the drawing and finding no problems, lottery officials certified Saturday's results, leading to three first-prize winners earning over $1 million dollars each.

The lottery's official website cited a statistician explaining, "this is a rare coincidence of identical results in two different lotteries."

According to Haim Melamed, "Combinations of such statistics, despite being rare, can occur and hence, a combination that already occurred in the lottery (can) have a chance to rise again ... like every other combination."