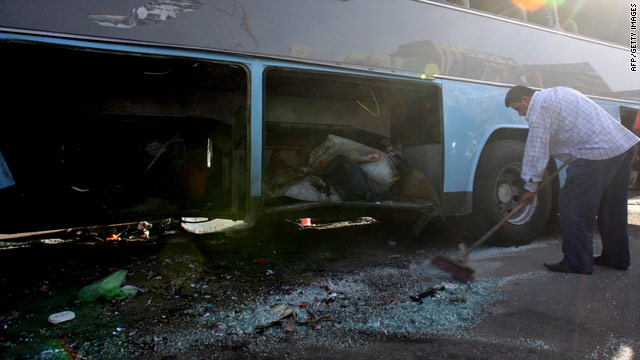 A worker clears shattered glass from the scene of a bombing that targeted a bus of Iranian pilgrims Tuesday in Baghdad.
STORY HIGHLIGHTS
RELATED TOPICS

The attacks occurred in Tikrit, Samarra and Baiji in Salaheddin province, farther north in Mosul and in the nation's capital.

The spurt of violence highlights U.S. and Iraqi worries over the tenacity of insurgents and anxieties that the parliament's political impasse is generating insecurity.

In Tikrit, a motorcycle rigged with explosives detonated outside the house of a military commander, Lt. Col. Qais Rashid.

Eleven members of Rashid's family were killed, including his father, three of his sisters and a 1-year old child. Four others were wounded. Rashid was not at home at the time.

In another attack in the city, two family members of Lt. Col. Khalid Akdhair, an Iraqi army officer, were wounded in a bombing. Akdhair was not home at the time.

Three police officers were killed and two others were wounded when insurgents planted a bomb at a police checkpoint in Samarra.

In Baiji, four people were wounded when attackers threw grenades at the houses of a doctor, a former Iraqi army officer and two members of the Sons of Iraq, the pro-government militia group.

The distress over the country's violence is reflected in a survey conducted by the U.N. High Commissioner for Refugees.

Many Iraqis who have returned to Baghdad after fleeing to neighboring countries have found that "physical insecurity, economic hardship and a lack of basic public services" have led the majority of them "to regret their decision to return to Iraq," the survey said Tuesday.

"The survey found that 61 percent of the Iraqi returnees interviewed regretted returning to Iraq from their country of asylum with 60 percent of this number stating that this was mainly due to insecurity and personal safety concerns," the U.N. refugee agency said.

Also, the failure of Iraq to form a government after the March 7 national elections has generated unease.

To form a government, a 163-seat majority out of 325 seats is needed. Since March, Prime Minister Nuri al-Maliki and former Prime Minister Ayad Allawi have been jockeying for support.

Al-Maliki's party won 89 parliamentary seats in the March election, losing by a narrow margin to Allawi's party, which won 91 seats.

Iran's influence has become a key point of debate as al-Maliki battles to keep his job.

Al-Maliki, leader of a coalition of powerful Shiite parties backed by Iran, met with leaders of the Islamic republic in Tehran on Monday. Allawi, the leader of a more secular coalition with much Sunni Arab backing, has accused Iran of fomenting unrest in Iraq and working to destabilize the Middle East.