Court in UAE says beating wife, child OK if no marks are left 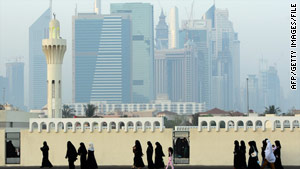 (CNN) -- A court in the United Arab Emirates says a man is permitted under Islamic law to physically discipline his wife and children as long as he leaves no marks and has tried other methods of punishment, the country's top court ruled.

The ruling came in the case of a man who slapped his wife and slapped and kicked his 23-year-old daughter, the document said.

The daughter had bruises on her right hand and right knee and the wife had injuries to her lower lip and teeth, the ruling said.

The court ruled that a man has the right to punish his wife and children. That includes beating them, after he has tried other options, such as admonition and then abstaining from sleeping with his wife.

However, the court ruled that in this case the man exceeded his authority under sharia, or Islamic law. His wife was beaten too severely and his daughter was too old to be disciplined, the ruling said.

"Although the [law] permits the husband to use his right [to discipline], he has to abide by the limits of this right," wrote Chief Justice Falah al Hajeri in a ruling issued this month and released in a court document recently. It was reported in the English-language publication The National.

"If the husband abuses this right to discipline, he cannot be exempted from punishment," according to the ruling.

Several experts said it is against Islamic law to permit wife-beating.

Jihad Hashim Brown -- the head of research at Tabah Foundation, which specializes in the interpretation of Islamic law -- couldn't comment specifically on what the courts did and didn't say because he hadn't read the ruling.

However, he said he feels confident that the UAE court didn't sanction injury or abuse. He said sharia law is complex and has been open to interpretation.

But he argued that in Islamic law it is "absolutely unlawful" to abuse a wife, injure her, or insult her dignity.

"When a situation in a marriage reaches the point where people feel like they need to hit someone, that is time for divorce. Anyone who would abuse, injure or even insult the dignity of their wife, this has now become a criminal offense which can be prosecuted in a court of law."

Canadian-Egyptian scholar Dr. Jamal Badawi, who has written about this topic, said "wife beating is not allowed in Islam" and said the Quranic verses and sayings back "the prohibition of any type of wife beating," especially on the face.

Summer Hathout, a lawyer and an activist for women's rights in California, argued that the UAE rulings are based on maintaning a patriarchal elite power structure.

"To those of us who know Islam and the Quran, violence against women is so antithetical to the teachings of Islam," she said.