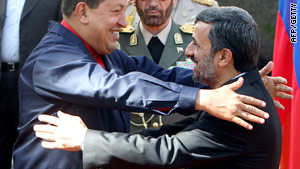 "The two countries' officials signed eleven letters of understanding and cooperation documents in fields of oil, energy, industries and commerce during the visit," IRNA reported.

With its burgeoning nuclear program, Iran has shown interest in uranium deposits in Venezuela.

Chavez's visit to Tehran comes a year after the Iranian leader's November 2009 trip to Venezuela.

The two presidents have cultivated warm relations publicly, exchanging hugs and referring to each other as "brother."

"We are here to welcome you, brother Ahmadinejad. Leader. Brother. Comrade," Chavez said then.

Ahmadinejad, in return, called Chavez "a brother, who is resisting like a mountain the intentions of imperialism and colonialism."

Chavez is among Ahmadinejad's top supporters in Latin America. The leaders find common ground in their opposition to U.S. foreign policy.

Earlier on his international tour, Chavez made stops in Russia and Belarus, where the Venezuelan leader also signed economic cooperation deals, which included an agreement with Moscow to build Venezuela's first nuclear power plant.

Syria and Portugal are also on the itinerary.