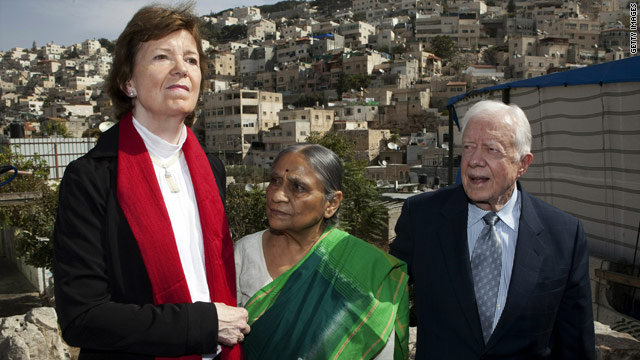 Jerusalem (CNN) -- Aida Rishek, a Palestinian mother of seven, lives in fear of eviction. She resides in one of the houses slated for demolition under Jerusalem's rezoning plan and fears she could be thrown out into the street.

She was one of the residents of the flashpoint neighborhood of Silwan who huddled on Thursday with three world leaders working to forge peace between Israelis and Palestinians.

Former Irish president Mary Robinson, former U.S. President Jimmy Carter, and Indian women's union leader Ela Bhatt heard complaints from the residents of Silwan in East Jerusalem, which Palestinians envision as the capital of a future Palestinian state. The three are members of the so-called Elders, influential world figures who work for peace.

Rishek and other residents described how police undercover units arrested children, how settlers and their security guards acted with impunity and violence and dominated the tourism industry in the area. One boy described being beaten and harassed.

After the meeting, Rishek handed her 9-month-old daughter to Carter.

"We want a promise from you. Give us just one night to sleep without the fear of the arrest of my husband and my children," she said speaking through an interpreter.

Carter told residents that the Elders delegation will communicate the issues to Israeli authorities and the group will continue to work on a peaceable solution. He envisions an Israeli withdrawal from eastern Jerusalem, which would serve as the capital of a future Palestinian state.

Robinson told reporters later that the Elders fear that the possibility of a two-state solution may be fading away or even lost because what is developing in Jerusalem.

"We are also troubled by the treatment of any Palestinian who opposes the government policies," she said.

"We are very worried that Israel is at risk at losing its credibility as a democratic state," she added.

Silwan is a largely Palestinian neighborhood of East Jerusalem that is also home to several hundred Israelis, who have moved in with the assistance of a right-wing organization dedicated to locating Jews in the area.

Silwan has also been at the center of a controversy over Jerusalem Mayor Nir Barkat's plan to build a commercialized tourist park in the neighborhood, which would require the demolition of 22 Palestinian homes.

Barkat says the homes to be destroyed have been built illegally and that he is simply upholding the law.

The eastern part of the city was seized from Jordan in 1967 by Israel in the war with its Arab neighbors and is home to more than 250,000 Palestinians and approximately 185,000 Israelis.

Israel claims the city as its sovereign and undivided capital -- a claim not recognized by the international community.

Palestinians consider all Israelis living in East Jerusalem to be settlers living in occupied territory.

CNN's Kevin Flower and Kareem Khadder contributed to this report