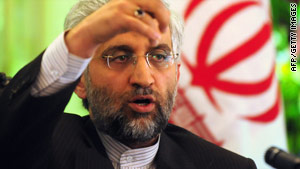 Tehran, Iran (CNN) -- An Iranian envoy is willing to meet starting next month with the six major global powers to hold talks on its nuclear program, a top European diplomat said Friday.

"This morning I have had a letter delivered through the ambassador from Iran, from Dr. [Saeed] Jalili, to say that he welcomes the fact that I have been in touch with him and that he is agreeable to beginning discussions after the 10th of November and wants to agree a time and place," Ashton said Friday.

"I think this is a very significant move and we're now in touch with Iran this morning to see whether we can agree the time and the place as quickly as possible."

Iranian President Mahmoud Ahmadinejad has taken a hardline ahead of nuclear talks scheduled for next month with world powers skeptical of his government's intentions.

Ahmadinejad has said Iran is ready to hold talks, but has warned that the Islamic republic won't yield any of its international rights to peaceful nuclear energy development, according to recent reports by state media.

"Holding talks with Iran is the best choice for you," Ahmadinejad was quoted by state-run Press TV as saying at a rally in Ardebil in northwestern Iran earlier this month. "You have no other option. All the other ways are closed. You know the fact very well."

In September, Ahmadinejad said an Iranian representative would meet with the "P5 plus one" group. The group is made up of the five permanent members of the United Nations Security Council -- the United States, Britain, France, China and Russia -- along with Germany.

The EU has proposed the two sides meet again in mid-November back in Geneva. Manouchehr Mottaki, Iranian foreign minister, has said that November 15 had been suggested for a meeting date.

Still, Ahmadinejad has said Iran is not weakening in its resolve. "They thought they can weaken the Iranian nation through imposing sanctions and posing threats, but Iranians have showed integrity, convergence and strength."