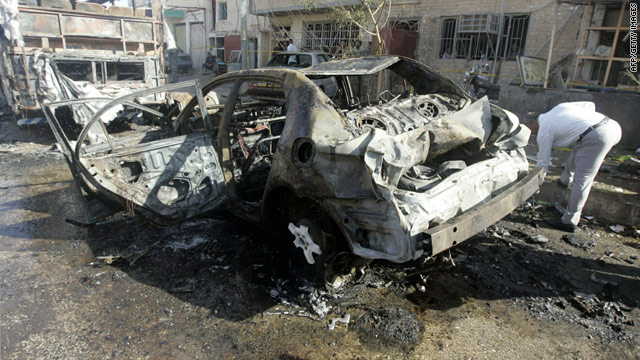 A man checks out the charred remains of a vehicle targeted in a bombing Monday in Najaf, Iraq.
STORY HIGHLIGHTS
RELATED TOPICS

Baghdad, Iraq (CNN) -- At least five people were killed and 39 wounded when a car bomb exploded Monday in Basra, an Interior Ministry official said, capping a day in which at least 11 people were killed in blasts in cities with Shiite shrines.

In Baghdad, two mortars or rockets struck the International Zone shortly before 8 p.m., though there were no reports of casualties.

On a crowded street in the Iraqi city of Karbala a blast killed at least 10 people and wounded 38 others, the official said. The bomb went off at one of the main entrances to the city where buses carrying Iranian pilgrims stop, the official said.

In Najaf, at least one person was killed and 10 others wounded in a bombing, the official said. The parked car bomb targeted buses carrying Iranian pilgrims at the road leading to Najaf's old city.

Najaf and Karbala, south of Baghdad, have seen increases in foreign pilgrims in the last two years after a drop in the daily widespread violence.

Iran's Fars News Agency said that on any given day, about 1,500 pilgrims travel from neighboring Iran to visit Shiite shrines in Iraq, particularly in Najaf and Karbala.

Elsewhere Monday, a roadside bomb detonated outside a busy restaurant in central Baghdad's Karrada district, wounding four people. The official said the bomb targeted a police patrol. Two of the wounded were police officers; the other two were civilians.

Earlier Monday, a mortar round struck the International Zone, popularly known as the Green Zone, but did not cause damages or casualties. A day earlier, at least two rockets struck the area and on Saturday, three others struck the zone.