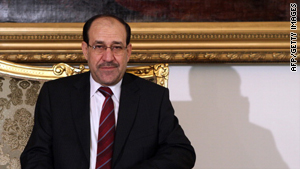 Baghdad, Iraq (CNN) -- Iraq's top political leaders are expected to meet again Tuesday to try and break the more than eight-months' deadlock to form a government.

Described by some of the leaders as "historic," the meeting is the first such public gathering of the politicians including the two main rivals -- Prime Minister Nuri al-Maliki and former Prime Minister Ayad Allawi -- since the March 7 elections.

In the March election, al-Maliki won 89 seats but lost to former Prime Minister Allawi's bloc, which received 91 seats. A 163-seat majority out of 325 seats is needed to form a government. The two leaders since have been jockeying for power.

Leading up to Monday's meeting, officials had said they were close to completing an agreement, but remarks made by a number of the leaders indicated that they have yet to address key sticking points that remain unresolved ahead of this week's parliament session.

Some of the issues included the main hurdles for government formation like agreeing on the allocation of the top posts like president, prime minister and parliament speaker and the distribution of powers.