U.S. offers incentives to Israelis to halt settlements for 90 days 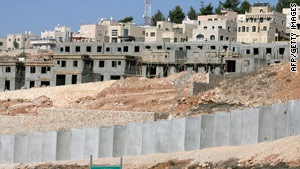 The U.S. will not seek to extend a settlement construction freeze beyond 90 days, Israeli sources said.
STORY HIGHLIGHTS

Jerusalem (CNN) -- In a bid to jumpstart the stalled Israeli-Palestinian peace talks, the United States has proposed that Israel impose a 90-day settlement construction freeze in the West Bank in exchange for incentives, according to Israeli government sources.

It was not clear early Sunday whether the cabinet had acted on the proposal.

In return for the temporary freeze, the U.S. government would oppose international efforts to impose a political solution on Israel in the peace process or to "delegitimize" the country, said the sources, who would not speak for attribution.

The White House would not ask for another extension of the settlement construction freeze beyond the 90 days, the sources said.

And, they said, President Barack Obama would ask Congress to approve the sale of 20 advanced fighter planes to Israel.

In addition, the United States would guarantee necessary security related to any future agreement with the Palestinians, the sources said.

A senior U.S. administration official said Friday that while talks between U.S. Secretary of State Hillary Clinton and Netanyahu on Thursday were substantive, there were no breakthroughs.

Another U.S. official said that the prime minister isn't budging on settlements in a way that will satisfy Palestinians, who broke off the peace talks when Israeli resumed settlement construction in late September.

But it wasn't clear whether that meant Netanyahu was unwilling compromise at all on settlements.

American officials have worked hard to bring the Israelis and Palestinians back to the bargaining table.

The American-brokered talks between Israel and the Palestinian Authority have broken down over the issues of continued Israeli settlement building in the West Bank. Tensions were exacerbated earlier this week when Israel announced plans to construct 1,000 new housing units in the majority Palestinian area of East Jerusalem.

The Palestinian Authority refused to go back to the negotiating table until the Israeli government extended the settlement freeze.

As the stalemate continues, the Palestinian side has been threatening to seek international recognition of a Palestinian state based on borders from 1967, a move opposed both by Israel and the United States.

He noted that the United States had cautioned that such an action would constitute a "unilateral move."

"(The Israelis) on a daily basis commit unilateral moves, beginning with the separation wall, settlements, checkpoints, incursions, and killings... and this all is not called a unilateral move?" Abbas asked.

Clinton warned both sides Wednesday to refrain from making moves that might undermine the stalled peace talks.

"We do not support unilateral steps by either party that would prejudge the outcome of such negotiations," Clinton said after a meeting with Egyptian Foreign Minister Aboul Gheit. "There will be no progress until they actually come together and explore areas where there is agreement, and ways to narrow areas of disagreement."

Clinton met Thursday with Netanyahu about the resumption of peace talks. Their meeting was followed by a joint statement that said their discussion included "a friendly and productive exchange of views on both sides."

"Secretary Clinton reiterated the United States' unshakable commitment to Israel's security and to peace in the region," said the statement.

Clinton added that "the United States believes that through good-faith negotiations, the parties can mutually agree on an outcome which ends the conflict and reconciles the Palestinian goal of an independent and viable state, based on the 1967 lines, with agreed swaps, and the Israeli goal of a Jewish state with secure and recognized borders that reflect subsequent developments and meet Israeli security requirements."

The meeting came a day after Clinton said the United States was "deeply disappointed" with Israel's decision to build new housing units in sensitive areas of East Jerusalem.

The Israeli government said Monday it is proceeding with plans for about 1,000 new housing units in East Jerusalem, a move that the chief Palestinian negotiator said would derail already suspended peace talks.

Construction of settlements in the West Bank, as well as new housing in East Jerusalem, have been criticized by the Palestinians, and such activity has been a stumbling block in the direct negotiations renewed by the Obama administration.