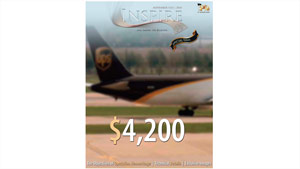 (CNN) -- A recent terror operation involving parcel bombs on UPS and FedEx flights cost just $4,200, according to a report in a magazine that analysts say is published by al Qaeda's branch in Yemen.

Inspire magazine dedicates its latest issue to the plot, which it calls "Operation Hemorrhage."

"The operation has succeeded in achieving its objectives. We thank Allah for His blessings," says the magazine, released late Saturday.

The article repeats al Qaeda in the Arabian Peninsula's claim of responsibility for the October plot to ship bombs disguised as printer toner cartridges on cargo planes.

On October 29, local authorities in the United Kingdom and the United Arab Emirates intercepted parcel bombs sent from Yemen and addressed to U.S. synagogues.

Al Qaeda bombmakers designed the parcel bombs to pass through detection devices and elude sniffer dogs, according to the article. It lists -- excluding metals from detonators, making the explosive mimic printer toner and integrating the bombs' circuits into printer cartridge circuits -- as methods of averting security detection.

The magazine also repeats a controversial claim of responsibility for the September 3 crash of a UPS flight in Dubai, United Arab Emirates, which killed the two crew members.

No evidence has surfaced of an explosion aboard the UPS cargo plane that crashed in September, officials in the United Arab Emirates have said. But authorities there have also said they are seriously looking into AQAP's claim.

But in a security bulletin earlier this month, the Department of Homeland Security and the FBI have concluded the AQAP statement was authentic, but they dismissed the group's claim that it was involved in the September UPS plane crash.

"Other terrorist organizations have falsely claimed credit for events with a high media profile to bolster their image and external perceptions of their operational capabilities," the bulletin said.

Inspire praises the September 11, 2001 attacks on the United States for their destruction and for the high number of lives they took. But it touts smaller, simpler attacks for the future.

"It is more feasible to stage smaller attacks that involve less players and less time to launch and thus we may circumvent the security barriers America worked so hard to erect," Inspire writes, calling this "the strategy of a thousand cuts."

Inspire says the strategy raises the cost of security in target countries, particularly the U.S., putting a further drag on an already weakened economy.

The article also directs a message at U.S. President Barack Obama and points out that terrorists had addressed the parcel bombs to synagogues "in Chicago, Obama's city."

"We have struck against your aircrafts twice within one year," Inspire writes, "and we will continue di­recting our blows towards your interests and the interests of your allies."

IntelCenter CEO Ben Venzke said a media organization connected to al Qaeda in the Arabaian Peninsula publishes the English-language magazine, which first came out in July.

Intelligence officials believe Samir Khan, an American citizen now living in Yemen, is the driving force behind the magazine.