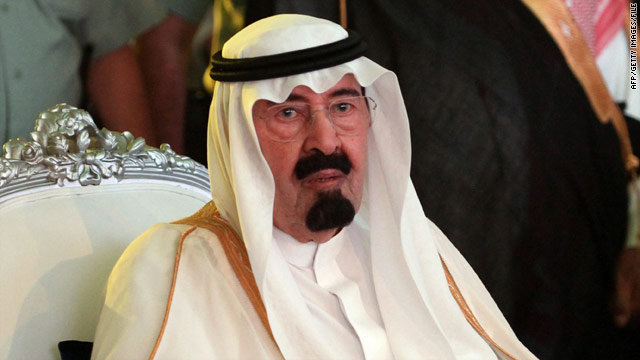 King Abdullah, 86, has been suffering from back pain due to a blood clot, a Saudi government official says.
STORY HIGHLIGHTS
RELATED TOPICS

(CNN) -- Saudi Arabia's King Abdullah will fly to the United States on Monday for treatment of a herniated spinal disc and a blood clot that is causing him back pain, the country's health minister said Sunday.

"The medical team recommended that that he leaves to the U.S. to visit a spine-specialized medical center in order to complete medical examinations and for follow-up treatment," Health Minister Abdullah al-Rabeeah said during an interview with Saudi state television. "But I assure everyone that he is in a stable condition, and that he is enjoying health and well-being, and God willing, he will be back safe and sound to lead this proud nation."

Doctors performed tests on the 86-year-old monarch Friday after he complained of back pain and had more tests on Sunday, the state-run Saudi Press Agency reported. His doctors have advised him to rest, but he took calls from Egyptian President Hosni Mubarak and Iranian President Mahmoud Ahmadinejad in which the regional leaders wished him a speedy recovery, the news agency reported.

Crown Prince Sultan is expected to return to Riyadh while the king is overseas, the Saudi Press Agency said. But there are also questions looming about the crown prince's health: He has lived in Morocco for much of the past year and a half after surgery for an undisclosed ailment in February 2009.

The top three figures in the kingdom -- Abdullah, Sultan and Prince Nayef, the country's interior minister and second deputy prime minister -- are all sons of King Abdul Aziz Ibn Saud, who founded modern Saudi Arabia in 1932. But the health of senior members of the royal family is "one of those things that is rarely discussed in the media in Saudi Arabia," said Christopher Boucek, a Saudi Arabia analyst at the Carnegie Endowment for International Peace in Washington,

"They're a little bit more open about this stuff, but this isn't something that's widely speculated about in the Saudi press," he said.

Abdullah has ruled the oil-rich kingdom since 2005. But he ran most of the kingdom's affairs for a decade before that on behalf of his ailing half-brother, King Fahd.

Since coming to power, he has sought to establish new rules and procedures for many Saudi institutions, giving him a reputation as a reformer in the highly conservative nation. Among his changes has been the creation of a new body to formalize rules of succession and to determine whether a monarch is healthy enough to remain in power, Boucek said.

Should Abdullah die or step aside and Sultan takes the throne, that new body -- known as the Bayat Council -- would choose the next crown prince, he said. Nayef is currently seen as a successor to the crown prince, but that position is "not exactly set in stone," Boucek said.

Abdullah has recently passed authority over the Hajj, the annual Muslim pilgrimage to Mecca, which is in Saudi Arabia, to Nayef. But he also has turned over command of the Saudi Arabian National Guard, the royal family's own security force, to his son, Prince Mitab bin Abdullah, Boucek said.