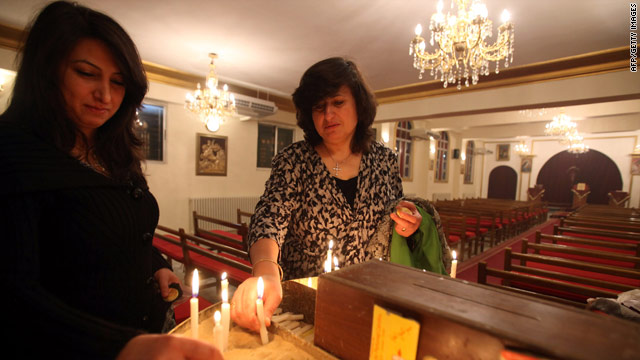 Iraqi Christians light candles at a church in Amman on November 21 after they fled their country.
STORY HIGHLIGHTS
RELATED TOPICS

Baghdad, Iraq (CNN) -- Three people were killed Monday in Iraq in the latest attack targeting Christians, police in the city of Mosul said.

In one attack, two Christian brothers were killed in Mosul when gunmen broke into their workplace in an industrial part of the city and shot them. The brothers were welders who owned the shop.

On Monday evening, police found an elderly Christian woman strangled in her home in central Mosul.

The attacks on Christians started October 31 in Baghdad have extended to the northern parts of the country, such as Mosul.

Last week, a bomb attached to the vehicle of a Christian man detonated in eastern Mosul, killing him and his 6-year-old daughter, local police told CNN.

The November 16 attack came one day after two Christian men in adjacent homes were killed after gunmen stormed their houses.

Also on November 15, a bomb detonated outside a Christian home. It caused damages but no injuries.

Iraq's Christian community, which numbered 1.4 million in 2003, is estimated to have dwindled to 500,000 as many have left the country, the U.S. Commission on International Religious Freedom has said.

The commission, a U.S. government agency that listed the numbers in its 2010 report, said Christian leaders are warning that this decline could signal "the end of Christianity in Iraq."