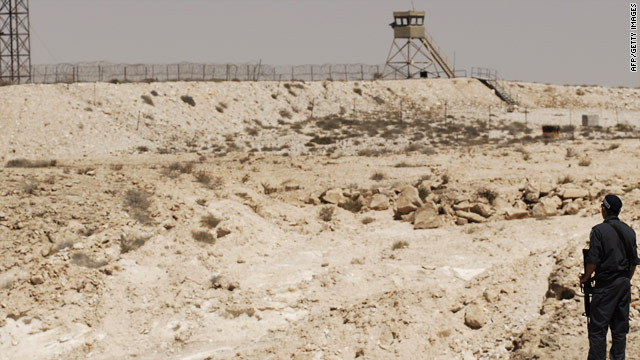 An Israeli policeman looks across to the Egyptian border from his own side.
STORY HIGHLIGHTS

Jerusalem (CNN) -- Israel started building a barrier along its border with Egypt Monday. The Israeli government says it is to prevent illegal immigrants from crossing into the country and to stop smuggling.

The 240-kilometer-long, $370 million barrier will be part fence and part surveillance technology. The project was announced in January by Prime Minister Benjamin Netanyahu. "This is a strategic decision to ensure the Jewish and democratic character of the state of Israel," he said.

The Israeli military estimates around 5,000 infiltrators entered Israel over the past year as well as 1.3 tonnes of hash and 130 kilograms of heroin.

Israeli human rights group Hotline for Migrant Workers estimates 90 percent of those crossing the border illegally are refugees from northern Africa. The rest are thought to be migrant workers or traffickers of drugs and women.

It had to be done a long time ago. It is not something directed at Egypt.
--Eli Shaked
RELATED TOPICS

The barrier could take several years to build across some difficult terrain. Israel's former ambassador to Egypt, Eli Shaked, told CNN there is nothing political about the decision to build it. "It is a necessity. It had to be done a long time ago. It is not something directed at Egypt," he said.

Israel has already built a controversial barrier separating the West Bank from Israel.

Construction started in 2002 in an attempt to stem the tide of Palestinian suicide bombing attacks during the course of the second intifada, which began in September 2000. Palestinians claim it is a land grab and has separated farmers from their lands and sometimes families from each other. The United Nations says 80 percent of it is built on Palestinian land.