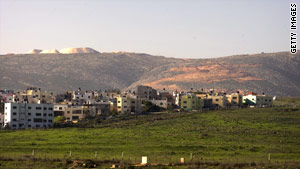 Israel captured the Golan Heights from Syria during the 1967 war.
STORY HIGHLIGHTS

(CNN) -- The Syrian Foreign Ministry rejected Tuesday the Israeli Knesset's passage of a requirement that a referendum approve any Israeli withdrawal from the Golan Heights and East Jerusalem.

An official source with the ministry said the requirement disregards international law and the will of the international community, which considers the areas to be occupied Arab lands, the state-run Sana news agency reported.

The reaction came a day after Israeli legislators passed the law, which makes a referendum likely on any peace treaty that involves ceding land the country has annexed.

The bill passed late Monday night, with 65 members in the 120-seat Knesset voting for it and 33 others voting against it.

It requires the nation's voters to weigh in on any agreement involving ceding annexed land that doesn't win a two-thirds majority in parliament.

Israel annexed East Jerusalem after capturing it from Jordan in the 1967 war. It captured the Golan Heights from Syria the same year.

The law does not apply to the West Bank.

Under the law, a referendum would be needed if a peace deal won the support of at least 60 members of parliament.

If, however, a peace deal were to pass the Knesset by a two-thirds majority -- that is, if 80 Knesset members were to support it -- then no referendum would be required.

The people are not a replacement for the need for real leadership.
--Opposition leader Tzipi Livni
RELATED TOPICS

"The Israeli public is engaged, knowledgeable and responsible and I have faith that, on decision day, it will support a peace agreement that adheres to Israel's national interests and security needs," Netanyahu said.

Tzipi Livni, the head of the opposition and the leader of the Kadima party, opposed the bill.

"The people are not a replacement for the need for real leadership," she said.

Anat Wilf of the Labour Party also voted against the bill.

"The referendum law is a serious blow to Israel's political system," Wilf said. "The state of Israel is one of the few democratic countries in the world whose political system has survived more than 60 continuous years. It has achieved this through a representative parliamentary system in which the Knesset is the supreme political body representing the sovereign people.... If a decision made by the Knesset is overruled by a referendum, what implications does it have for the Knesset's status as Israel's supreme political body?"

Chief Palestinian negotiator Saeb Erakat denounced the law, saying that Israel has a "clear and absolute obligation" under international law to withdraw from territories it captured since 1967.

"Ending the occupation of our land is not and cannot be dependent on any sort of referendum," he said.