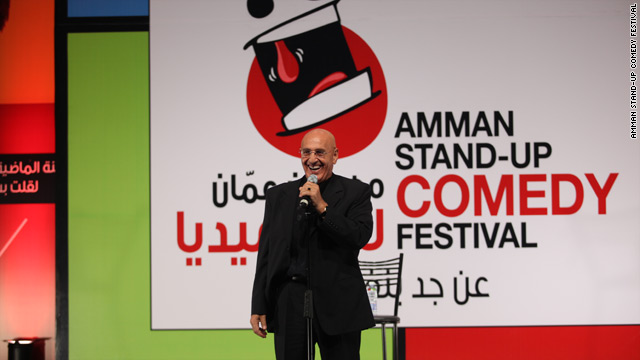 (CNN) -- Egyptian comedy promoter Maha Hosny is driving through the traffic-clogged streets of Cairo while talking to CNN on her cell phone, when there's a terrifying screech of tires and the line goes dead.

Thankfully, she's unscathed, and within minutes is once again talking about her pioneering work bringing stand-up comedy to new Egyptian audiences -- and what tickles her funny bone.

"Just going through the streets of Cairo makes me laugh. The traffic here makes me laugh until dying," she said, her near miss with a "crazy driver" dismissed as just another joke.

Later she emails to say she arrived safely at her destination. Just as well for Egypt's comedy fans, who will be looking to Hosny to help deliver the follow-up to the wildly successful "Hysteria" stand-up show held in Cairo earlier this year.

Though little heard of just a few years ago, stand-up comedy is now serious business in Cairo and other cities across the Middle East, drawing huge crowds, according to comics in the region.

And while western acts may have paved the way for this new enthusiasm for solo stage comics, the format has proved so popular that the region is now witnessing the rise of home-grown talent.

"It's a phenomenon," said Dean Obeidallah, an Arab-American comic whose 2008 "Axis of Evil" tour of the Middle East, featuring a cast of comedians from the region, is viewed by many as the catalyst for launching a new wave of comedy.

Arabs in the region love to laugh at themselves, that's something we don't see in the Western media
--Dean Obeidallah, stand-up comic
RELATED TOPICS

Obeidallah will, next month, be reprising his role as executive producer of the Amman Stand-up Comedy Festival, a week-long event in the Jordanian capital.

Perhaps aided by Jordan's more relaxed laws on censorship for the region, the Amman festival has, in three years, grown to become the biggest event of its kind in this part of the world, said Obeidallah.

But Jordan is only the beginning, according to Obeidallah.

"The festival is representative of a bigger growth, a trend. In Saudi Arabia they have a thriving stand-up comedy scene with 10 or 12 comics doing regular shows. Same thing in Egypt, Lebanon, Oman and Qatar," he said.

Though it might seem otherwise to outsiders, people in the Middle East are no strangers to humor, with rich traditions of comic storytelling.

Veteran Jordanian comedian Nabil Sawalha has seen it all, performing in stage plays, television satire and sitcoms, but is now enjoying a new chapter in his long career thanks to stand-up.

"Now it's taken off seriously in Arabic. I might be practically the only one who can do a whole evening, but there are a few young people coming up who can do five or 10 minutes here.

"They still need experience, but people are willing to venture and make a fool of themselves in front of other people, which is new."

While the language might have changed, the jokes themselves touch on themes familiar to western audiences, touching on the everyday topics of relationships, traffic, pop music, Facebook and Arabic culture.

"The Arabs in the region love to laugh at themselves, that's something we don't see in the Western media," says Obeidallah.

"If you don't do jokes about Arab culture in your show, they miss it because the level of laughs for those jokes are so much higher than for generic jokes about relationships or the state of the world."

Sherry Davey, a British-American comic who has been invited to perform in Amman for a second time, says her routine, which sees her offer "comedy therapy" to men in the audience, works equally well in Jordan as it does at home.

"Women all over the world are just as fed up of their husbands and tired of their bloody children as we are," she jokes.

But, adds Obeidallah, in most Middle Eastern countries -- even in relatively liberal Jordan -- there are limits. Sex and cursing are to be avoided, as are jokes about religion and country leaders.

"I was in Lebanon and the producer of the show said say what you want but if you make fun of [militant group] Hezbollah you're on your own," he said. "That was an effective message."

That said, some are already willing to take a few risks.

"I have been surprised by seeing some naught bits -- whether talking about farting or sex and some swear words here and there, and Jordanians take it and have a good laugh," says Sawalha, who refuses to remove political jokes from his own show.

"It's different elsewhere. I've performed in Beirut, Dubai and Qatar where the censors would cut a lot of my script -- but then I would go ahead and do it anyway."

He adds: "In the Arab world we have so much political upheaval and so much tragedy that there is a lot of scope to turn these tragedies into comedy and laugh at them so that you can enjoy life."