Militant leader among 12 caught in connection with Iraq church siege 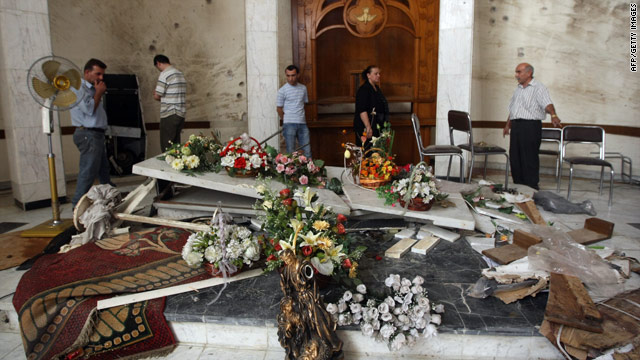 Baghdad, Iraq (CNN) -- The leader of a Muslim fundamentalist militant group was among 12 arrested in connection with a deadly church siege in Baghdad last month, Iraq's Interior Ministry said Saturday.

Huthaifa al-Batawi, the leader of the Islamic State of Iraq, was the "mastermind, direct supervisor and planner" of the October 31 attack on the Sayidat al-Nejat Cathedral, or Our Lady of Salvation Church, according to an Iraqi interior ministry statement. The attack left 70 people dead and 75 wounded, including 51 congregants and two priests.

The Islamic State of Iraq, an umbrella group that includes a number of Sunni extremist organizations and has ties to al Qaeda in Iraq, claimed responsibility for the Baghdad church siege. It was among the first of many attacks in recent weeks targeting Christians, which have left scores dead and many more wounded throughout the Middle Eastern nation.

Iraqi security forces made the arrests of the 12 "suspected terrorists," who also have links to al Qaeda in Iraq and a wave of Baghdad explosions on November 2, an Iraqi interior ministry official confirmed. The arrests took place in recent days.

Gen. Ahmad Abu Ragheef, the head of internal affairs at the Interior Ministry, said in an Iraqiya interview that al-Batawi confessed to his role in the church siege, telling Iraqi authorities who he was and about other attacks he supervised.

Al-Batawi also said that the group were planning attacks inside Baghdad's heavily fortified International Zone and at the ministries of defense and planning, according to Ragheef.

The government says it has seized six tons of explosives spread across five hideouts.

According to the Interior Ministry statement, al-Batawi is the successor to Munaf al-Rawi, who was detained in March.

In an exclusive interview with CNN in May, al-Rawi described himself as al Qaeda in Iraq's top commander in Baghdad and said he oversaw the August 19, 2009, twin suicide bombings that hit Iraq's ministries of finance and foreign affairs. More attacks in October of that year targeted the Baghdad government and the Ministry of Justice.