In Iran, anger over strikes on scientists 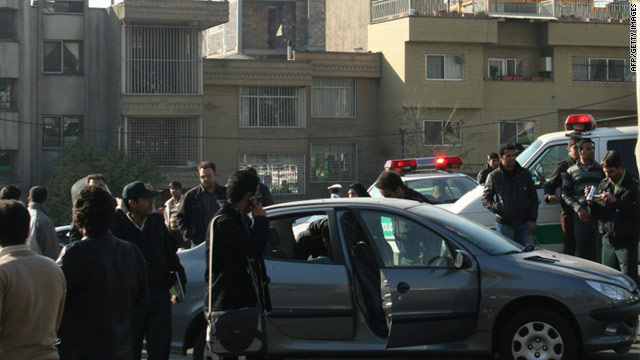 (CNN) -- Iranian officials, outraged over attacks against two nuclear scientists, say they suspect Israel and Western countries were responsible for incidents that Iran continues to investigate.

"The main suspects are those Western countries that claim to advocate human rights but use it as a political tool to exert pressure on other countries," said Ramin Mehmanparast, the Iranian Foreign Ministry spokesman, according to Iran's state-run Press TV. "All those countries that are threatening the Islamic Republic of Iran ... are the main suspects behind such incidents."

Assailants on motorcycles attached bombs to cars carrying Majid Shahriyari and Fereydoun Abbasi on Monday. Shahriyari died but Abbasi and his wife escaped with minor injuries. Shahriyari's wife and driver were injured.

The two were nuclear physics professors at Shahid Beheshti University in Tehran, according to Iran's official Islamic Republic News Agency.

The Institute for Science and International Security, a non-profit group in the United States focused on stopping the spread of nuclear weapons, also identified the two as nuclear scientists.

Mehmanparast didn't rule out a link between the attacks and remarks from the head of the British intelligence agency MI6 "about challenging Iran's civilian nuclear program," Press TV reported.

Thousands of students rallied at the school Tuesday and chanted slogans against the United States, Israel and Britain. They demanded the attackers be brought to justice.

Asked about the attacks, U.S. State Department spokesman P.J. Crowley said Monday that "all I can say is we decry acts of terrorism wherever they occur, and beyond that, we do not have any information on what happened."

A United Nations resolution cited Abbasi as a "nuclear scientist," the state-run Press TV said. That suggests that the "perpetrators behind the assassination could be traced through those who included the professor's name in the U.N. resolution," Press TV said.

Foad Izadi, a lecturer at the University, told Press TV on Monday that the resolution was a "hit list."

The attacks come amid international worry over Iran's nuclear aspirations.

U.S. diplomatic documents leaked by WikiLeaks indicate that along with Western nations and Israel, Arab countries, including Saudi Arabia, also are concerned about Iran's nuclear program.

There have been efforts by international powers to head off what many believe is Iran's work to develop nuclear weaponry.

Ahmadinejad said Tuesday that Iran has agreed to another round of nuclear talks with the United States and other nations.

A spokeswoman for Catherine Ashton, the European Union's foreign policy chief, said the talks will take place in Geneva, Switzerland, on Monday and Tuesday of next week, Press TV said.