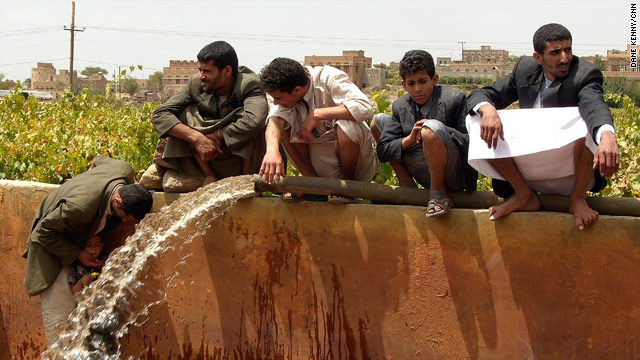 Sana'a, Yemen (CNN) -- On a bright and sunny day just outside of Yemen's capital Sana'a, Mohammed and his family work their fields and tend their crops, not knowing it is precisely their effort to earn a decent living that is helping create a very big problem for this country.

At least twice a day, they pump thousands of liters of water from wells they've dug into a reservoir that is used to irrigate their sprawling crops. And they aren't the only ones. The scene is repeated throughout thousands of of farms in the country.

Walking through the lush green farmlands of Yemen, it's hard to imagine that in as little as five to 10 years, this rich and fertile soil could soon become dry and barren.

Yet experts predict that is precisely what will happen if something is not done to stave off a looming water crisis in this country south of Saudi Arabia, where the Arabian and Red Seas meet the gulf of Alden.

With a population of 24 million and growing and despite a 1,185 mile shoreline, the poorest nation in the Middle East, they warn, is on target to be the first country in the world to literally run out of water.

Growing qat makes them a lot more money. But growing it also uses up a lot more water.
--Mohammed, Farmer

Exacerbating the problem, these fields that used to consist primarily of grape vines, are now rapidly being replaced by farmlands filled with a thirsty crop called qat.

Qat, a mild narcotic plant, is chewed daily in almost every part of the country and is an integral part of the culture here. It has become Yemen's addiction, requiring a steady supply to feed the nation's growing demand.

How much more? Conservationists say qat requires as much as five times more water to cultivate than the grapes that used to grow in its place.

No one understands how dire the situation has become more than Yemen's Water and Environment Minister, Abdulrahman Al-Eryani. He says 91 percent of the country's water resources are used for agriculture. And 40 percent of that is being used to irrigate qat.

The situation is so critical that, out of the country's 15 aquifers, only two are being replenished. Some members of Yemen's government have floated the idea of moving the capital, as well as desalinating seawater on the coast and pumping it to Sana'a.

" so all the farmers know that the water is drying up."

But because qat can be harvested many times per season, whereas grapes only once, the profit it fetches in the local markets makes it too hard for farmers to resist.

"The government has to decide what they want to do," Al-Eryani says. "I think qat is a very insidious drug that's not affecting only water, but it's affecting the whole society, health-wise, economic-wise and education and social-wise."

Ironically, despite his aversion to the plant, he also understands its practical realities.

"I am a farmer and I have qat farms and I'm getting very good income from qat," he says. "So, what I should do is, I should think about my bottom line... where my profit is."

Al-Eryani argues farmers, much like himself, will need to see government-backed incentives before they'll ever switch to growing other crops or turn to the conservation methods needed to avert this collision course with nature.

He says Yemen can no longer depend on emotions or even awareness about the crisis to change the situation, that only firm policies and legislation will force farmers to stop wasting so much water.

Yet as Sana'a's water basin continues to deplete, Mohammed's family, like so many others throughout the region, are still digging deeper and deeper to find the water they need.

Three years ago they only had to go down to a depth of 300 meters, now it's 500 meters. Soon that depth will be even greater. And one day they will dig and find no water at all.

Knowing that the water has become much scarcer, Mohammed says he cannot depend on the government to help, so he will do the only thing he can, which is to continue to pray for rain.

When asked if he knows his country will soon run out of water and what that means for future generations, he sighs.