Shark hunt on after woman killed off Egypt's coast 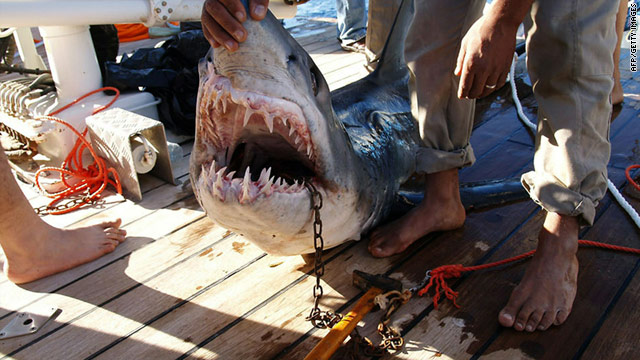 A picture released by the Egyptian ministry of environment on Thursday shows a shark believed to be behind an attack on tourists in the Red Sea resort of Sharm el-Sheikh last week. Another shark is being hunted in a Sunday attack.
STORY HIGHLIGHTS
RELATED TOPICS

(CNN) -- A German woman died Sunday after being attacked by a shark in waters off Sharm el-Sheikh, Egypt, in an area where three snorkelers were injured and two sharks were caught last week, officials said.

Egypt's tourism ministry has decided to close the Sharm el-Sheikh beach until the shark responsible for Sunday's attack is found, according to the nation's Interior Ministry.

The 70-year-old woman, a regular guest at the resort, was snorkeling near a reef when she was attacked, he said. She called for help, and a lifeguard brought her to shore, but she had lost too much blood and resuscitation efforts failed, Van Lysebettens said. The woman's arm and leg were severed, he said.

After the Sunday incident, the Chamber of Diving and Watersports called on its members in the region "to stop any snorkeling activities happening from any boats or shore." The chamber is under the umbrella of the Egyptian Tourist Federation.

Van Lysebettens said all tourists were ordered to stay out of the water at least through Monday. The dive community is organizing volunteer expeditions to find the shark, he said, and about 40 people will search Monday.

The chamber said that as of Friday, the condition of three injured snorkelers -- two Russian women and a man from the Ukraine -- were unchanged. One of them was critical, the chamber said in a statement, but did not say which one. The three were attacked in a 24-hour period November 30 and December 1, the chamber said.

Van Lysebettens said he is not a marine biologist, but many have speculated an oceanic white-tipped shark was responsible for the German woman's death, as well as the other attacks. Divers are upset because the two sharks killed Friday are thought to be innocent. They were a mako shark and another oceanic white-tipped shark -- which did not match pictures taken by someone accompanying one of the injured snorkelers, he said.

Officials at the national park did not provide details on "why the animals could not be relocated to remote waters as was previously suggested," the chamber's statement said, adding it "does not wish to see any harm to any further sharks."

Officials are not sure what triggered the feeding behavior, described as highly unusual.

"This incident has clearly shocked our community, and the CDWS is continuing its investigation into why this may have happened," Hesham Gabr, head of the Chamber of Diving and Watersports, said in the statement. "It is clear from our initial discussions with shark behavioral experts that this highly unusual spate of attacks by an oceanic white tip shark was triggered by an activity, most probably illegal fishing or feeding in the area."