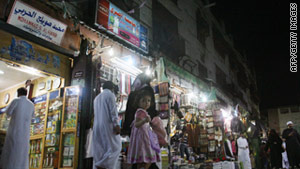 The cable suggested a thriving nightlife beneath the conservative facade of Jeddah's streets.
STORY HIGHLIGHTS

(CNN) -- "The full range of worldly temptations and vices are available -- alcohol, drugs, sex -- but strictly behind closed doors."

If you want to get your readers' attention, it's not a bad way to start. The language comes from a short but tantalizing U.S. diplomatic cable sent last year from the consulate in Jeddah in Saudi Arabia -- where alcohol is banned and carnal relations strictly regulated.

"Behind the facade of Wahabi conservatism in the streets, the underground nightlife for Jeddah's elite youth is thriving and throbbing," the cable begins.

In evidence, then Consul General Martin Quinn refers to a Halloween party last year. The redacted cable reads: "Along with over 150 young Saudis (men and women mostly in their 20s and early 30s), ConGenOffs accepted invitations to an underground Halloween party at Prince XXXX residence in Jeddah on XXXX."

"The scene resembled a nightclub anywhere outside the Kingdom: plentiful alcohol, young couples dancing, a DJ at the turntables, and everyone in costume," it said.

The notorious Vice Police were nowhere to be seen "because the religious police keep their distance when parties include the presence or patronage of a Saudi royal and his circle of loyal attendants." There are literally thousands of princes in Saudi Arabia, but the host of this event was able to trace his lineage back to a direct ancestor of King Abdullah.

As for the details of the party, the cable continues: "The hired Filipino bartenders served a cocktail punch using sadiqi, a locally-made moonshine.... It was also learned through word-of-mouth that a number of the guests were in fact 'working girls,' not uncommon for such parties."

The cable goes on to make the point that black-market liquor is prohibitively expensive -- even for princes. A bottle of Smirnoff vodka might cost the equivalent of $400. "Additionally, though not witnessed directly at this event, cocaine and hashish use is common in these social circles and has been seen on other occasions," it adds.

The Consul General draws an interesting conclusion at the end of his dispatch. "Parties of this nature and scale are believed to be a relatively recent phenomenon in Jeddah. ...It is not uncommon in Jeddah for the more lavish private residences to include elaborate basement bars, discos, entertainment centers and clubs."

"As one high society Saudi remarked, "The increased conservatism of our society over these past years has only moved social interaction to the inside of people's homes."