Iraq church siege victim: 'My soul is in this place with them' 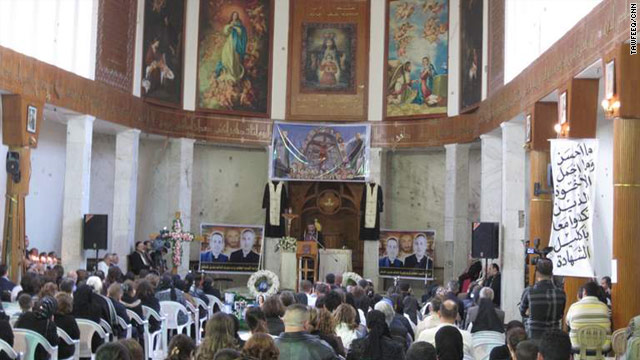 Tight security guarded Thursday's gathering at the scene of the siege by Qaeda-affiliated attackers in October.
STORY HIGHLIGHTS

She had not been to church in three years until October 31, when her cousin threatened to stop visiting her if she did not go.

That day, militants stormed Baghdad's Our Lady of Salvation Church, killing 51 congregants and two priests in a brutal attack that authorities said was the worst in a recent surge of violence targeting Iraq's Christians.

Butros survived. Her cousin, a 27-year-old priest, did not.

Butros was among more than 100 people who came to the church Thursday to mark 40 days since the attack -- a mourning period commonly observed by some communities in the Middle East.

In her head, she still hears the last words she said to him: "I will see you and talk to you after Mass."

Now, she said she cannot stop visiting the church.

"I am attached to this place. Every other day I come here. I feel like my soul is in this place with them," Butros said as she knelt to light candles on the floor during the somber memorial paying tribute to the killed and wounded Christian victims.

Tight security guarded Thursday's gathering at the scene of the siege, where al Qaeda-affiliated attackers took members of the congregation hostage for more than four hours, turning an evening mass into a bloodbath.

Dozens of women in black sat weeping in rows of plastic chairs that replaced destroyed pews at the church, now dubbed "Our Lady of Martyrs" by many Christians.

The windows -- shattered by the impact of three suicide bombers who detonated their vests during the siege -- remained broken. Bullet marks still scarred the church's charred walls. Blood splatters stained the ceiling.

A large poster of a photo collage bearing the pictures of all the victims hung outside. A bride in white, an infant and a 3-year-old child were among them.

A memorial with their pictures and candles stood by the altar. Their names, surrounded by candles, formed a cross on the ground. Brightly colored candles with the faces of those who lost their lives were displayed in a corner for mourners to see.

My daughter refuses to go to college. She is afraid of everyone around her and avoids people.
--Mother of survivor
RELATED TOPICS

Maha al-Khoury pointed to one picture after another.

"This is my uncle. This is his son, Bassam. This is Bassam's wife and her father. Bassam was married for eight months and expecting a baby. And the one in the middle, Raghda was a newlywed, she was married for 40 days. She was also pregnant," she said.

Now, fear has paralyzed lives of her surviving family members, she said.

"My daughter refuses to go to college. She is afraid of everyone around her and avoids people. We stay at home. We are afraid to go out, afraid to move," she said.

Fear has gripped most of Iraq's Christians since the siege and the string of bombings and assassinations that followed -- targeting them not only in their places of worship, but in their own homes.

On Sunday, gunmen killed an elderly couple after breaking into their Baghdad home, the latest in a series of similar slayings. More than a dozen bombs exploded outside Christian homes last month.

Like other minority groups, Christians have been targeted in violent outbreaks over the past seven years.

But many worry that the intensified campaign may drive away the country's remaining Christians.

"It feels very sad for us to be targeted in our own country. Where should we go now? I have been living here for more than 60 years and now they want us to leave our homes. This is too much and too painful," said Ronah George, an elderly woman.

She left the church weeping.