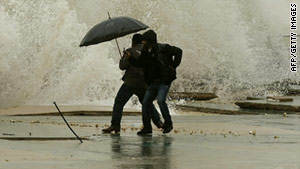 Two Lebanese men face the onslaught as waves crash into a promenade in the southern city of Sidon on Sunday.

The low-pressure system left a wake of destruction as it moved across the region, producing 48 sustained hours of severe weather conditions, noted CNN meteorologist Taylor Ward.

Three people died in the port city of Alexandria, Egypt, after strong winds and heavy rains contributed to the partial collapse of at least 28 buildings, state-run Nile TV reported.

Heavy swells and high winds shook a Royal Caribbean cruise ship early Sunday as it approached Alexandria, the company said in a statement. Several passengers received minor injuries and the ship itself suffered minor damage, before its captain opted not to dock the ship and moved on to its next destination in the Maltese city of Valetta, the statement said.

Members of a Moldavian cargo ship radioed for help Sunday morning after stormy weather caused the boat to sink off the coast of Ashdod, Israel, an Israeli military spokesman said. All 11 crew members managed to lower themselves into life boats and were picked up by a nearby ship.

Back on land, winds blowing up to 110 kph (68 mph) riled up dust storms, including in Gaza and northern Israel.

Low visibility, heavy snow and strong winds made most roads near the eastern Lebanese city of Zahleas, as well as in the Al-Masnaa region along the Syrian border, accessible only to 4-wheel drive and similarly equipped vehicles, the state-run National News Agency reported. The Zahle-Dhour Shweir Highway near Zahle, though, was shut down to all traffic after parts were blocked by piles of snow.

Beirut alone has been deluged by 106 mm (over 4 inches) of rain since Friday night, with nearby mountains getting snow.

The rain itself was a welcome sight for areas that have experienced severe drought, having received only half of their typical annual precipitation so far this year.

While the current storm system was forecast to taper off by early Monday, another low-pressure front is set to move east into Turkey early next week could dump heavy rain in northern Lebanon and Israel, and scattered showers elsewhere in the Middle East, Ward said.