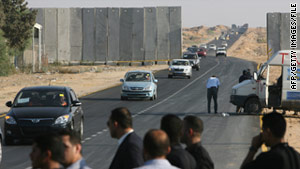 Jerusalem (CNN) -- The general in charge of the Israeli government's program to ease the economic blockade of Gaza, cited major progress Tuesday, saying the flow of goods into Gaza has increased many fold.

That message given by Major Gen. Eitan Dangot, the coordinator for Government Activities in the Territories, the Israeli army section responsible for handling Palestinian civilian affairs in the West Bank and Gaza.

Speaking at a news conference, he detailed how presently 180 to 200 double container trucks are entering Gaza daily compared with about 80 to 90 such trucks before the June decision.

He estimated that soon the capacity at the Kerem Shalom crossing point will reach 300 trucks per day. But he also sounded a note of concern regarding the recent upswing of rockets and mortars fired into Israel by Palestinian militants from inside Gaza. "In the last weeks we are facing launching of rockets and mortar shells around Gaza, all over from the north to the south at Kerem Shalom," he said.

He said that this put the lives of those handling the transfer of material into Gaza in danger.

The general explained that all goods going into Gaza are coordinated with the Palestinian Authority, which is situated in the West Bank, even maintaining what he called a "24 hour hot line" with Palestinian officials in Ramallah. Looking toward the coming year, he said he planned to increase the capacity of trucks going into Gaza to 400.

The increase in materials entering Gaza supports 78 projects that are being implemented by the international community. Twenty-two projects are in education, 16 are water and sewage works, 10 agricultural and others in the field of housing, health and electricity.

There has also been an increase of business people allowed to travel out of Gaza to conduct business in the West Bank and Israel in order to promote economic growth. Daily about 60 to 80 such people travel out of Gaza. However when the general was asked about allowing unrestricted freedom of movement to go in and out of Gaza for its population, he made clear that Israeli security concerns would rule on that matter.

He said, "We made a very clear division between the economic activities to security considerations; the movement from Gaza to the West Bank are under security considerations." He added that people can apply according to humanitarian reasons such things as medical needs, and he said that about 85% are given approval.

The general's upbeat presentation is not the picture given by a recent study co-authored by several human rights organization. The report states, "Israel's failure to live up to its commitments and the lack of international action to lift the blockade are depriving Palestinians in Gaza of access to clean water, electricity, jobs and a peaceful future," said Jeremy Hobbs, director of Oxfam International, one of the 22 groups that signed the report entitled "Dashed Hopes: Continuation of the Gaza Blockade."

"Only a fraction of the aid needed has made it to the civilians trapped in Gaza by the blockade," Hobbs added.

The report goes on to say, "There has been so far no tangible improvement practice, on the contrary, there has been a decrease in the rate of permit approvals for entry and exit of U.N. agencies' national humanitarian staff. Permit policy for aid workers and medical patients remains arbitrary and unpredictable and time consuming."

As far as the West Bank, the general expressed satisfaction, especially in regard to Israeli-Palestinian security cooperation. He spoke of "the deep coordination on the security activities between organizations from the side of the PA to the IDF that is running with a full policy of understanding from the level of the commanders till the level of the high senior officers."

Israel first imposed the economic blockade on Gaza back in 2007 when Hamas took control of the area by ousting its Fatah rivals from the coastal trip. Fatah is the party of Palestinian President Mahmoud Abbas, which controls the Palestinian Authority.

The Israeli policy changed in June after a Turkish ship carrying pro-Palestinian activists and humanitarian supplies sought to break the Israeli blockade of Gaza and was attacked by Israeli commandos who killed nine activists. Israel came under strong international criticism for its actions, and in order to ease the pressure, decided to change its restrictions on what is allowed into Gaza. It still forbids what it calls "dual use items" such as cement which Israel fears will be used for building bunkers and tunnels.