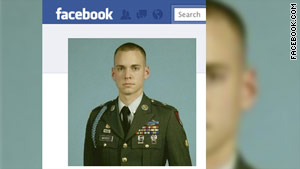 The family of Nicholas Moody announced his charges were dismissed on a Facebook page.
STORY HIGHLIGHTS

Abu Dhabi, United Arab Emirates (CNN) -- An American soldier turned private security contractor -- who had been detained on weapons-related charges in the United Arab Emirates -- said he knows that he broke the law, but does not understand why the courts took months to review his case while he sat in jail.

"I understand the why, the things that I had were in violations of the laws," said Corporal Nicholas Moody. "Okay, I get that... Why I was held for two months before I even got a day in court, I have no idea."

Moody, from Nevada, was arrested September 29 during an 18-hour layover in Abu Dhabi while heading back from Iraq.

He was charged with possession of weapons accessories -- parts that could accompany a gun, though no firearm itself -- which is illegal in the UAE.

"I was going through security and at the last security checkpoint before getting on the plane... they scanned my bags and determined that the items I have were in violations of their laws and they arrested me," Moody told CNN.

Moody said he used the items "in my work as my security guard, and that is why I had them on me because I was just travelling home from a job."

The items included a pistol grip, a buttstock, a plastic front grip, a single-point sling adaptor, a buckle from a single point sling, a cleaning kit and an armorer's wrench.

"I didn't think something like that would be a problem." he said.

Moody said the items were in his possession because he had recently resigned his position in Iraq and they were his personal property.

Moody, who has served in Iraq and then Afghanistan as part of the California and then Nevada National Guards, had been released from jail on bail, but it was uncertain when he would be allowed to leave the United Arab Emirates.

Moody's visa expired while he was in jail and his passport was being held by the government, his attorneys said. He would need to renew his visa before he could leave.

Those who created a support website on Facebook rejoiced about the development in the case. More than 2,500 people have expressed support to the "Help Bring Nick Moody Back Home" site on Facebook.

"NICK'S CASE WAS DISMISSED!!!!!!!!!! The paperwork will take a couple days, then travel arrangements will be made for Nick to come home! THANK YOU EVERYONE FOR THE LOVE, LETTERS, SUPPORT, PRAYERS AND POSITIVE ENERGY!" the site said.

In a November interview, Moody's mother, Lorina Moody, said she was still coming to grips with how he landed in jail.

"Our son is the type of individual who would not have willingly broken the law," said Lorina Moody of Susanville, California.

"It seems so ironic that a man who, after serving our country in two combat zones ... is the one who got pulled aside," she said.

After graduating from high school in 2005, Nicholas Moody enrolled in the California National Guard and, for a time, served in Iraq, according to his mother. He later moved to Reno, intending to attend the University of Nevada campus there, and joined the Nevada National Guard. Nicholas Moody became an inactive Guardsman when he took his latest job in Iraq with a security company, which Lorina Moody declined to name.

In that interview Moody said: "I'm hoping there's a still a chance that this will be resolved in time to make it home to spend Christmas with my family."